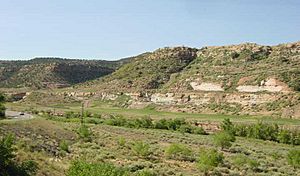 Uravan (a contraction of Uranium vanadium) is an abandoned uranium mining town in western Montrose County, Colorado, United States, that is now a Superfund site. The town was a company town established by U. S. Vanadium Corporation in 1936 to extract the rich vanadium ore in the region. As a byproduct of vanadium extraction, small amounts of uranium were also produced, at the time mostly used as a yellow pigment.

The town was located approximately 90 miles (140 km) south-southwest of Grand Junction along the San Miguel River. At one time, over 800 people lived in Uravan, and the town housed a school, a trading center (store), medical facilities, tennis courts, a recreation center, and a pool. However, Uravan was abandoned by the 1980s, and no trace of its former buildings remain.

There are several prehistoric sites near Uravan on the Colorado State Register of Historic Properties:

In 1885, placer gold was discovered in a tributary of the San Miguel River, Mesa Creek, nine miles from Ouray. The Montrose Placer Mining Company constructed the "Hanging Flume" on the east wall of Dolores River Canyon. 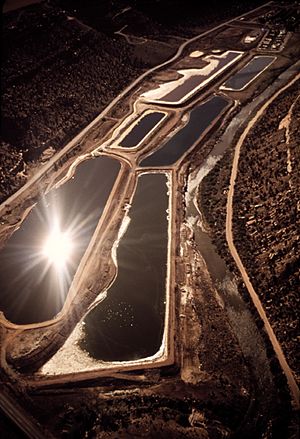 In the beginning of the Cold War, to ensure adequate supplies of uranium for national defense, the United States Congress passed the U.S. Atomic Energy Act of 1946, creating the U.S. Atomic Energy Commission (AEC) which had the power to withdraw prospective uranium mining land from public purchase, and also to manipulate the price of uranium to meet national needs. By setting a high price for uranium ore, the AEC created a uranium "boom" in the early 1950s, which attracted many prospectors to the four corners region of the country. Uravan's fortunes grew as it became one of the major "yellowcake towns" in the region.

American military requirements of uranium declined in the 1960s, and the government completed its uranium procurement program by the end of 1970. Simultaneously, a new market emerged: commercial nuclear power plants. However, the U.S. domestic uranium mining industry collapsed in the late 1970s and early 1980s, due to lack of new nuclear power plants, and to low-price uranium imported from Canada.

Environmental cleanup of the site commenced in 1986 and was essentially completed by 2001. (EPA, 2010, Five-Year Review) All the buildings have been removed and the site regraded and replanted. All that remains is a turnoff and interpretive sign along State Highway 141.

On May 6, 2012 the Montrose County Board of County Commissioners signed the Omnibus Agreement with Dow Chemical, giving them three tracts of land: Ballpark Parcel #1, a 133-acre plot between Hwy. 141 and the San Miguel River, Ballpark Parcel #2, approximately 10 acres northwest of the first parcel, and the Townsite property, located between County Rd. EE22 and County Rd. Y11. Montrose County agreed to accept this property on behalf of the Rimrocker Historical Society of Western Montrose County, which worked tirelessly since 1990 to properly preserve and interpret the history of Uravan. The Rimrocker Historical Society and Montrose County entered into a long term lease on May 1, 2013 for a 17-acre section of Ballpark parcel #1, with the intention of building a museum and campground on the property. The Rimrocker Historical Society of Western Montrose County hosts the annual Uranium History Celebration and Reunion Picnic at Historic Uravan, Colorado every August, sponsored in part by the Cold War Patriots. For the 100th anniversary of the original Joe Jr. Mill in 2012, over 1,000 people attended.

All content from Kiddle encyclopedia articles (including the article images and facts) can be freely used under Attribution-ShareAlike license, unless stated otherwise. Cite this article:
Uravan, Colorado Facts for Kids. Kiddle Encyclopedia.