Valon Behrami (born 19 April 1985) is a Swiss former professional footballer who played as a midfielder.

Behrami was capped 83 times at international level by the Switzerland national team, playing at four FIFA World Cups, UEFA Euro 2008 and UEFA Euro 2016 from his debut in 2005 to his international retirement in 2018.

Behrami was born to Kosovar Albanian parents in Mitrovica, Kosovo, at the time part of SR Serbia within SFR Yugoslavia. When he was five, his parents both lost their jobs; his mother Halime as a secretary and his father Ragip as a manager of a plastics company. As a result, Behrami along with his parents and older sister Valentina moved to Stabio, a village in Ticino, a canton in the Italian-speaking region of Switzerland. Behrami's mother described him as energetic: "As a child, running was Valon's favourite pastime – he just never got tired. Even now, he can hardly sit still for a second. He always needs a ball at his feet."

Behrami started out playing football with Swiss club sides FC Stabio, FC Chiasso and FC Lugano. After a number of impressive appearances with Lugano, he was signed by Italian team Genoa in the 2003–04 season, and played for them in the Serie B championship. In January 2004 he joined Udinese along with Rodrigue Boisfer in exchange for Mohammed Gargo and Vittorio Micolucci, in flopped transfer price in co-ownership deal to create "paper" profit.

In the 2004–05 season, Genoa bought out Udinese' rights to the player and loaned him out to Verona, again in Serie B.

After an impressive season with Verona, Lazio signed him on 25 July 2005, as first a co-ownership deal for €2.7 million. and Lazio bought him outright in January 2006, for the same price.

Despite his clearance hitting Rodrigo Taddei's head and ricocheting into Lazio's goal to concede their first goal of the match, his 92nd minute winning goal etched Behrami's name into Lazio's history books as they won the Derby della Capitale on 19 March 2008 and virtually finished the Scudetto hopes for rivals Roma. 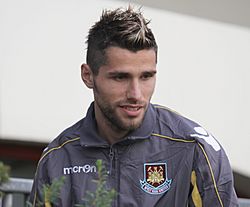 On 23 July 2008, West Ham United signed Behrami from Lazio, with the player signing a five-year contract for a fee of £5 million. Behrami made his debut for West Ham in the 2–1 home win over Wigan Athletic on 16 August 2008. His versatility would see him become a vital part of West Ham's midfield, having begun the season as a stand in for captain Lucas Neill at right back. He scored his first goal for West Ham in the 1–0 away win against Sunderland on 23 November 2008. During the home win over Manchester City on 1 March 2009, he suffered an anterior cruciate ligament injury in his left knee that required oxygen to be administered on the field during a six-minute break in play. His knee and ankle twisted badly when his studs caught in the turf resulting in a premature end to his 2008–09 season.

Behrami made his comeback as a substitute on 12 September 2009 against Wigan Athletic. His return was interrupted by injury again for a month from November. He scored his first and only goal of the 2009–10 league campaign with the opener in a 3–0 home win over relegation rivals Hull City on 20 February 2010. 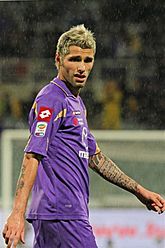 On 26 January 2011, Behrami moved to Fiorentina for an undisclosed fee, signing a three-and-a-half-year contract. He made his debut with Fiorentina on 29 January 2011, in a Serie A fixture against his former team Lazio.

On 17 July 2012, Behrami and his Fiorentina teammate Alessandro Gamberini were signed by Napoli for undisclosed fees.

On 31 July 2014, Behrami flew into Germany to complete a medical ahead of his €4.5 million move to Hamburg. The subsequent bonuses could raise the fee to €6.5 million based on 20 appearances in his first season. He committed to a three-year contract with an option for a fourth.

On 11 July 2015, Behrami watched on as his teammates drew 2–2 with AFC Wimbledon, later that afternoon the club confirmed Behrami signed a three-year contract with Watford.

On 16 August 2017, Behrami signed a two-year deal with Italian club Udinese, who are owned by the Pozzo family just as his previous club Watford.

In July 2019, he joined Swiss club Sion. On 3 October 2019, his contract with Sion was terminated by mutual consent.

On 2 January 2020, Behrami joined Genoa for the second time. On 5 January, he came on in his debut as a substitute in a 2–1 home win against Sassuolo in the 72nd minute.

On 31 January 2022, Behrami signed with Serie B club Brescia.

Behrami scored a key goal against Turkey at the Stade de Suisse in the first leg of their 2006 World Cup qualifying playoff tie. During the 2006 tournament, he suffered a groin injury which put him on the sidelines for the first two group matches. In the third match against South Korea, he was substituted late in the game in the 88th minute. He did not participate in the loss to Ukraine in the last 16.

Behrami was in the starting eleven of Switzerland for all three matches during the 2008 UEFA European Championship, playing a total of 272 minutes.

On 21 June, in the 2010 World Cup, after appearing to elbow Chilean player Arturo Vidal, Behrami was sent off with a red card in the second Group H match against Chile and became the first Swiss player to be sent off in a World Cup match.

Behrami was included in the Switzerland 23-man squad for the 2018 FIFA World Cup. In their opening game, on 17 June, a 1–1 draw with Brazil, his performance was described as excellent, with note being made of his constant harassment of Brazil's Neymar. He became the first Swiss player to appear in four consecutive World Cup editions.

In July 2018 it became known that Behrami married his girlfriend, Swiss alpine ski racer Lara Gut, after only having been dating for a few months.

All content from Kiddle encyclopedia articles (including the article images and facts) can be freely used under Attribution-ShareAlike license, unless stated otherwise. Cite this article:
Valon Behrami Facts for Kids. Kiddle Encyclopedia.