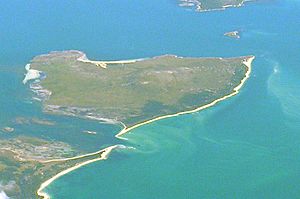 Vansittart Island, also known as Gun Carriage Island, is a granite island with an area of 800 hectares (2,000 acres). The island is part of Tasmania's Vansittart Island Group, lying in eastern Bass Strait between Flinders and Cape Barren Islands in the Furneaux Group.

It is partly private property and partly leasehold land and is currently used for grazing Wiltshire Horn sheep. The island is part of the Franklin Sound Islands Important Bird Area, identified as such by BirdLife International because it holds over 1% of the world populations of six bird species.

Most of the original vegetation of the island has been cleared by the use of fire and by bulldozers with chains, destroying many stands of Oyster Bay pine.

All content from Kiddle encyclopedia articles (including the article images and facts) can be freely used under Attribution-ShareAlike license, unless stated otherwise. Cite this article:
Vansittart Island Facts for Kids. Kiddle Encyclopedia.