Wandoan /ˈwɒndoʊ.ən/ is a town and locality in the Western Downs Region, Queensland, Australia. It was formerly known as Juandah. It is on the Leichhardt Highway about halfway between Taroom and Miles and is the centre for the local cattle industry. At the 2011 census, Wandoan had a population of 665. 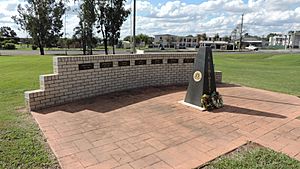 The beginnings of the Wandoan township can be traced back to 1853 when 'Juandah' Station was established at this location in 1849. When Herbert Salway and Percival Sydney Francis Stephen first tendered for a huge area of land: Juandah of 23,000 acres (9,300 ha) and two other runs Coringa of 21,000 acres (8,500 ha) and Cherwondah of 19,200 acres (7,800 ha). This area, defined in accordance with the 1847 Orders-in-Council, falls far short of the actual size of the holding, which has been estimated at 449 square miles (1,160 km2)—five and a half times as much. The aggregation of these three runs became known as Juandah and records show Percival Stephen was living on Juandah before August 1849. A wayside hotel was built there in the 1890s, and by the end of the nineteenth century the hotel was well established and a township was formed.

After World War II, land around Wandoan was used for soldier settlements through ballots in the 1950s.

The Wandoan War Memorial is in front of the Community Culture Centre on Henderson Street and commemorates Australians who served in all wars. There are plaques for individual wars on the wall behind the memorial. The monument was dedicated on 25 April (Anzac Day) 1993. 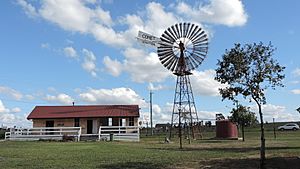 The following are features of interest in Wandoan:

The Wandoan Information Centre on Royd Street provides information for visitors. It is housed in a former railway station building and is easily spotted by the large windmill beside it. 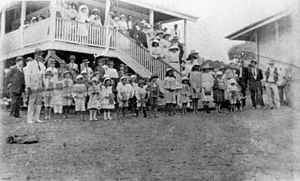 Juandah Provisional School opened on 30 October 1911. It became a State School on 1 March 1915 and was renamed Wandoan State School in 1924. 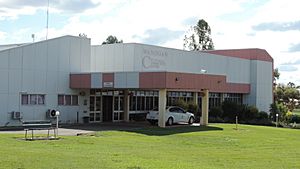 Wandoan has the following services:

All content from Kiddle encyclopedia articles (including the article images and facts) can be freely used under Attribution-ShareAlike license, unless stated otherwise. Cite this article:
Wandoan Facts for Kids. Kiddle Encyclopedia.