Ward (elevation 9,450 feet (2,880 m)) is a Home Rule Municipality in Boulder County, Colorado, United States. The population was 150 at the 2010 census. The town is a former mining settlement founded in 1860 in the wake of the discovery of gold at nearby Gold Hill. Once one of the richest towns in the state during the Colorado Gold Rush, it is located on a mountainside at the top of Left Hand Canyon, near the Peak to Peak Highway (State Highway 72) northwest of Boulder. 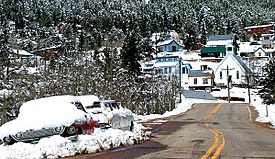 View of Ward from below along Lefthand Canyon Road

The town was named for Calvin Ward, who prospected a claim in 1860 on the site known as Miser's Dream. The town boomed the following year with the discovery by Cyrus W. Deardorff of the Columbia vein. Over the next several decades the population fluctuated, growing from several hundred to several thousand before declining once again. The mines in the area remained profitable for many decades, with one mine eventually producing over 2 million ounces (62 metric tons) of silver. A post office with the name Ward District was established January 13, 1863; the name was changed to Ward, September 11, 1894. The city was incorporated in June 1896. The railroad reached the area in 1898, arriving over the Whiplash and Switzerland Trail, which climbed over 4,000 feet (1,220 m) from Boulder over the course of 26 miles (42 km). In January 1900 over 50 buildings were destroyed by a devastating fire, although the profitability of the mines led to the immediate rebuilding of the town. The town was largely deserted by the 1920s, but the construction of the Peak-to-Peak Highway in the 1930s led to a revival of the town. During WWII the town's year-round population dropped to four people. Then, in the 1960s, the town's population jumped from between 10-20 year-round residents to well over 100 due to the town's interest to hippies.

The town has several businesses along its main street, including a restaurant, a coffee shop and general store. 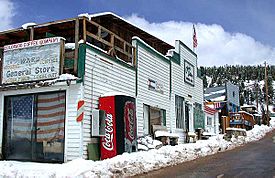 There were 75 households out of which 26.7% had children under the age of 18 living with them, 34.7% were married couples living together, 5.3% had a female householder with no husband present, and 52% were non-families. 37.3% of all households were made up of individuals and 8% had someone living alone who was 65 years of age or older. The average household size was 2 and the average family size was 2.67.

All content from Kiddle encyclopedia articles (including the article images and facts) can be freely used under Attribution-ShareAlike license, unless stated otherwise. Cite this article:
Ward, Colorado Facts for Kids. Kiddle Encyclopedia.