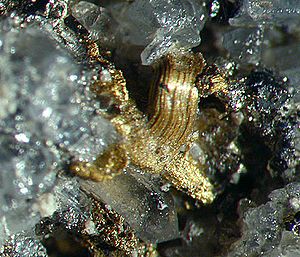 Wire gold from the Cash Mine, Gold Hill. Detail of larger specimen; click on photo & scroll down for more views.

Gold Hill is a census-designated place (CDP) in Boulder County, Colorado, United States. The population was 230 at the 2010 census. This settlement is located to the northwest of Boulder, perched on a mountainside above Left Hand Canyon at an elevation of 8,300 feet. Originally a mining camp, it was the site of the first major discovery of gold during the 1859 Colorado Gold Rush and remained an important mining camp throughout the late 19th century, with a population approaching 1500 at its height, before falling into decline. It has been revived somewhat in recent years as a quiet isolated haven, with no paved streets, but easily accessed by dirt roads. The town contains numerous historic wooden structures, some restored in recent years, as well decaying ruins from its mining heyday. It has a small museum and two-room schoolhouse, the Gold Hill School, which since 1873 has been the oldest continuously operating public school in Colorado. Other businesses include a General Store and a restored inn listed on the National Register of Historic Places. The town is laid out on a small grid of dirt streets.

Gold Hill is accessible from nearby Left Hand Canyon Road via Lick Skillet Road, the steepest county road in the United States. Easier approaches to Gold Hill include Sunshine Canyon Road from 4th and Mapleton in Boulder, Gold Run Road from Salina (on Four Mile Canyon Road), and Gold Hill Road from the Peak-to-Peak Highway (State Highway 72) south of Ward. All of these roads are susceptible to heavy snows during the winter, which at times render Gold Hill inaccessible to vehicles not equipped with chains or four wheel drive.

Gold Hill is sometimes labeled a ghost town, which is an inaccurate designation. Gold Hill is part of unincorporated Boulder County, and while it does not have a municipal government, it does have an active town meeting with elected officials.

The community is located above Gold Run, the first lode discovery of gold in Colorado (at that time the area was part of the Nebraska Territory) on January 15, 1859. The discovery occurred nearly simultaneous with prospecting in Gregory Gulch and Clear Creek, but these latter discoveries were not exploited until later that Spring. On March 7, 1859, the Gold Run discovery became the first mining district in region (named either the Mountain District No. 1, Mining District No. 1 of the Nebraska Territory, or the Nebraska Gold Hill Mining District, according to various historical sources). Word quickly spread among miners in the region, prompting a flood of new arrivals and the establishment of Gold Hill as the first permanent mining camp in present-day Colorado. By autumn, a quartz stamp mill was erected at the base of the hill, the first such piece of equipment in the region, one that had been transported by ox cart westward over the Great Plains. The first productive vein was the Scott, followed quickly the Horsfal, Alamakee, and Cold Spring. Nearby placers were also worked for the gold in stream beds.

By 1861, the year of the organization of the Colorado Territory, the surface deposits of gold in the vicinity of the town were largely played out, resulting in a temporary exodus of prospectors and a population decrease. The town was somewhat revived later that year by the construction of the Hill smelter at nearby Black Hawk, allowing the treatment of lower-grade ores.

The discovery of tellurium in the area in 1872 prompted a second boom, bringing the population to nearly 1000 once again. At its height, the town had a newspaper and number of hotels, including the Mines Hotel, built in 1872 and recently restored as summer tourist destination. The Mines was immortalized in verse by poet Eugene Field, who stayed at the hotel while working as a newspaper man in Denver. The town population dwindled in the early 20th century as the mining tapered off. The town has experienced two major fires in its history, but it nevertheless retains many of its historic wooden structures.

In September 2010, the Four Mile Canyon wildfire destroyed approximately 170 homes in and around Gold Hill.

According to the United States Census Bureau, the CDP has a total area of 2.0 square miles (5.2 km2), all of it land.

There were 90 households out of which 33.3% had children under the age of 18 living with them, 46.7% were married couples living together, 2.2% had a female householder with no husband present, and 46.7% were non-families. 35.6% of all households were made up of individuals and 1.1% had someone living alone who was 65 years of age or older. The average household size was 2.33 and the average family size was 3.00.

All content from Kiddle encyclopedia articles (including the article images and facts) can be freely used under Attribution-ShareAlike license, unless stated otherwise. Cite this article:
Gold Hill, Colorado Facts for Kids. Kiddle Encyclopedia.