Warra is a town in the Darling Downs region of Queensland, Australia. It is in the Western Downs Region local government area and on the Warrego Highway, 256 kilometres (159 mi) north west of the state capital, Brisbane. At the 2006 census, Warra had a population of 84. 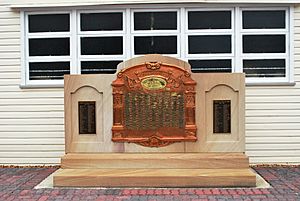 The Warra Honour Board was unveiled on 14 May 1917 by Member of the Queensland Legislative Assembly in Dalby, William Vowles.

The name Warra has been used as a name for a crater on the planet Mars, without specifically commemorating the town.

All content from Kiddle encyclopedia articles (including the article images and facts) can be freely used under Attribution-ShareAlike license, unless stated otherwise. Cite this article:
Warra, Queensland Facts for Kids. Kiddle Encyclopedia.