Warsaw is a city in and the county seat of Kosciusko County, Indiana, United States. Warsaw has a population of 13,559 as of the 2010 U.S. Census. Warsaw also borders a smaller town, Winona Lake.

Warsaw, named after the capital of Poland in tribute to Tadeusz Kościuszko, platted on October 21, 1836. The Warsaw post office was established in 1837.

Early Warsaw contained traders, trappers, and merchants supplying manufactured goods to area farmers. Because of the central location in the lake region, tourists soon began visiting Warsaw and eventually made permanent residences in the city, with industry soon following.

In March 1854, Warsaw became a town, and the initial census on February 2, 1854 showed a total of 752 residents in the town limits. The Pennsylvania Railroad (then known as the Pittsburgh, Fort Wayne, and Chicago Railroad) reached Warsaw in November 1854. The Big Four Railroad (Cleveland, Cincinnati, Chicago, and St Louis) arrived in Warsaw in August 1870.

Gas lights were installed in August 1880. Telephone lines were strung in 1882, with Dr. Eggleston having the first phone. The waterworks were constructed in 1885. Gas was supplemented with electricity in 1897, but gas was still used in many homes until 1915.

In 1895, Revra DePuy founded DePuy Manufacturing in Warsaw to make wire mesh and wooden splints, becoming the world's first manufacturer of orthopedic appliances. In 1905, DePuy hired Justin Zimmer as a splint salesman. Zimmer broke away from DePuy in 1927 to start his own orthopedic company with Joe Ettinger in the basement of Ettinger. Warsaw is now known as the "orthopaedic capital of the world." 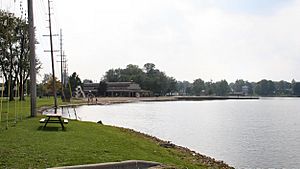 Center Lake Park in October 2005, located on the shore of Center Lake.

Warsaw is home to the Wagon Wheel Theatre founded in 1956 and becoming a non-profit organization in 2011 featuring a "theatre in the round".

The Rotary Club of Warsaw was chartered on June 1, 1919, being one of the oldest clubs in the community and part of Rotary International. residence. 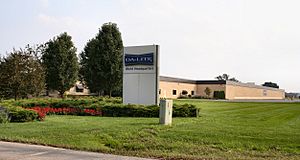 Warsaw, known as the "Orthopedic Capital of the World", is home to the first orthopedic device manufacturer, the DePuy Manufacturing Company, started in 1895 by Revra DePuy. Competitors, such as Zimmer, Inc. in 1927 and Biomet, Inc. in 1977, have subsequently been founded in Warsaw to support the industry. Several orthopedic suppliers are also present.

The city has a lending library, the Warsaw Community Public Library.

All content from Kiddle encyclopedia articles (including the article images and facts) can be freely used under Attribution-ShareAlike license, unless stated otherwise. Cite this article:
Warsaw, Indiana Facts for Kids. Kiddle Encyclopedia.