The Washington Governor's Mansion is the official residence of the governor of Washington. The Georgian-style mansion is located on the grounds of the State Capitol campus in the capital city Olympia. It is on the crest of Capitol Point, with a view of mountains, Capitol Lake, and the city.

The mansion was designed in 1908 by the architectural firm Russell and Babcock of Tacoma. The residence was built at a cost of $35,000 and has 19 rooms. The cornerstone ceremony was attended by Governor Albert E. Mead, numerous dignitaries, state officials, and several hundred spectators. Mead never lived in the house, however; he was defeated in the Republican primary election of 1908 by Samuel G. Cosgrove, who served for one day (January 27, 1909) because he became ill and was taken to a spa in Paso Robles, California, where he died on March 28. Cosgrove missed the official housewarming and Lieutenant Governor Marion E. Hay, who became governor after Cosgrove's death, was the first governor to live in the official residence. All governors and their families have lived in the Mansion since.

Hay's wife, Elizabeth Hay, purchased $15,000 worth of furnishings from Frederick & Nelson, and many of these original selections remain, including a mahogany buffet, table, consoles, 18 chairs in the State Dining Room, and the grandfather clock on the staircase landing. In 1915, Governor Ernest Lister and his family moved out because they said there was not enough money to keep the house warm during winter. Electricity eventually replaced gas lighting in the building. The building was weatherstripped during the 1950s as part of renovations, but roof leaks, clanking radiators, faulty plumbing, and sagging floors persisted. 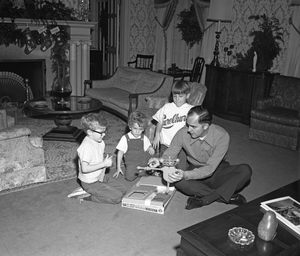 Governor Daniel J. Evans with his children in a residential room of the mansion during Christmas 1969

In 1958, the State Legislature discussed having the structure demolished, as it was on a valuable piece of land, in order to build a new legislative office building. In 1963, three legislators introduced a bill again proposing a new office building on the site.

Governor Daniel J. Evans and his family moved into the mansion in 1965. At the time, costs for a new mansion were estimated to be two million dollars. Evans's wife Nancy advocated for the preservation and renovation of the existing mansion and in 1972 founded the Foundation for the Preservation of the Governor's Mansion, which was renamed the Governor's Mansion Foundation in 1988. In 1973, the Legislature appropriated $600,000 for mansion's remodeling and renovation.

Evans wanted to establish a committee "to stimulate interest in donating furniture, paintings and objets d'art as well as financial support of the mansion's public rooms, maintaining a consistency in design and style. I am endeavoring to form a state-wide committee of importance which will actively seek donations, both tangible and monetary, and whose interest in history and art will help perpetuate public interest in the mansion." The first meeting of the Foundation occurred on May 30, 1972, with 47 women and 5 men present. The Foundation decided to use a master plan prepared previously for refurbishing the mansion by Jean Jongeward, an interior designer from Seattle who donated her services to the project. The plan called for the use of furnishings of the period from 1780 to 1830.

In 1997 Governor Gary Locke and his family were repeatedly harassed by a colony of bats that were cohabiting the mansion. After the governor chased a bat out of his bedroom, the first family were vaccinated against rabies as a precaution. Eventually, as the infestation grew worse, Locke, his wife, child, and cats relocated to a private residence while groundskeepers dealt with the problem. Four years later, in 2001, the mansion was damaged by the Nisqually earthquake.

All content from Kiddle encyclopedia articles (including the article images and facts) can be freely used under Attribution-ShareAlike license, unless stated otherwise. Cite this article:
Washington Governor's Mansion Facts for Kids. Kiddle Encyclopedia.