Wasootch Peak is a 2,352-metre (7,717-foot) mountain summit located in the Fisher Range of Kananaskis Country in the Canadian Rockies of Alberta, Canada. The peak is situated on the northern end of the ridge that separates Wasootch Creek from the Kananaskis River. Wasootch Peak's nearest higher peak is Old Baldy, 1.54 km (0.96 mi) to the southeast. The peak may be seen from Highway 40, and is prominently featured from the ski slopes at Nakiska. Wasootch is from the Stoney language word wazi, which translated means unique. 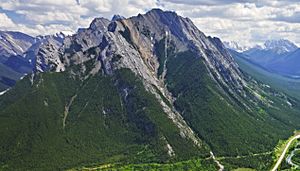 Based on the Köppen climate classification, Wasootch Peak is located in a subarctic climate zone with cold, snowy winters, and mild summers. Temperatures can drop below −20 °C with wind chill factors below −30 °C. In terms of favorable weather, June through September are the best months to climb. Precipitation runoff from the mountain drains into Wasootch Creek and the Kananaskis River.

All content from Kiddle encyclopedia articles (including the article images and facts) can be freely used under Attribution-ShareAlike license, unless stated otherwise. Cite this article:
Wasootch Peak Facts for Kids. Kiddle Encyclopedia.