Wattle Grove is a suburb of Perth, Western Australia, located within the Shire of Kalamunda.

Wattle Grove is approximately 3/4 Semi Rural, and 1/4 Urban Development. It contains some of Hartfield Park, and extends from Crystal Brook Road to Roe Highway. Major Transport Routes through the suburb are Welshpool Road, Hale Road, Tonkin Highway and Roe Highway.

The nearest Train stations are

Playgrounds are located throughout the new subdivisions in the suburb, as well as walking and bike paths leading to newly created artificial lakes.

Wattle Grove is served by Wattle Grove Primary School, and a Community TAFE Centre in Lewis Road and the Bible College of Western Australia (Private). The new primary school built on the area bordered by St John Road, Tomah Road, and Acastus Road opened to students in 2011. The old primary school on Welshpool road was mothballed with no alternative usage envisioned.

Wattle Grove is well connected to other regions of Perth due to its proximity to the Roe Highway and Tonkin Highway. The most direct route to the Perth CBD is via Welshpool / Shepperton Roads (12 km all in 60 km/h zones), however alternative routes are available via Orrong Road / Graham Farmer Freeway (14 km in 70 & 80 km/h zones), Tonkin Highway / Great Eastern Highway (18 km in 100 & 60 km/h zones), and Roe Highway / Kwinana Freeway (23 km all in 100 km/h zone and the only route without traffic lights).

Wattle Grove has no major retail facilities within its boundaries, has two vets, a motel, a number of nurseries, landscape suppliers, agistment paddocks, boarding kennels and a Bird / Fish & Reptile shop.

The nearest Police Station is at Forrestfield,and Public Hospitals are available at Bentley and Kalamunda.

Prior to European settlement the Beeloo people occupied much of Wattle Grove. In 1827 the Colonial Botanist Charles Fraser and Captain James Stirling explored the region to evaluate its suitability for farming. Initially the area was used for forestry and orchards; fruit growing continues to be one of the major industries in Wattle Grove, Bickley and Orange Grove today. Much of Wattle Grove has developed into other agricultural uses such as poultry farms, equestrian studs, agistment paddocks, horticultural nurseries, pet kennels, hobby farms and cattle breeders. 20 residents of Wattle Grove were killed in action during World War One (1914–1919), 5 of whom were from the one family. 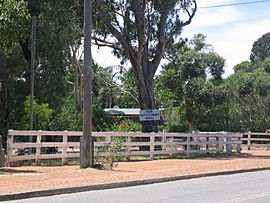 After a concerted campaign was lost during the 1980s by the Save our Foothills action group a quarter of the suburb bounded by Welshpool Road, Tonkin Highway and Roe Highway has been rezoned as Urban Development by the Shire of Kalamunda and is known as cell 9 in the Kalamunda Shire Plans. This area of Wattle Grove is now a hive of activity as land is subdivided and houses built. The price of land in cell 9 has subsequently risen exponentially since the first sub division in 1999.

All content from Kiddle encyclopedia articles (including the article images and facts) can be freely used under Attribution-ShareAlike license, unless stated otherwise. Cite this article:
Wattle Grove, Western Australia Facts for Kids. Kiddle Encyclopedia.