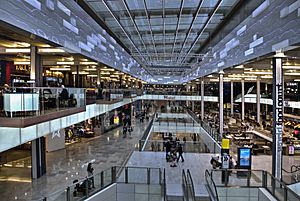 Interior of Westfield Stratford City, viewed from the 2nd floor 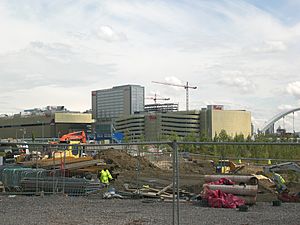 Construction in June 2011 at ground level 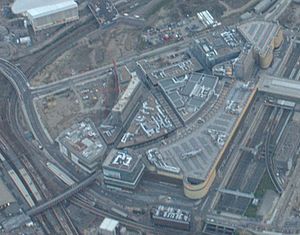 Originally fully owned by the Westfield Group, in November 2010 ABP Pension Fund and CPP Investment Board each purchased a 25% shareholding, with Westfield retaining 50%. Westfield's holding is now owned by Unibail-Rodamco-Westfield following Unibail-Rodamco's acquisition of Westfield Corporation in 2018.

Westfield Stratford City is adjacent to the London Olympic Park, International Quarter London, East Village, Stratford Regional and Stratford International stations. The shopping centre is part of a large multi-purpose development project called Stratford City. It is promoted as contributing significantly to the local economy, with the creation of up to 10,000 permanent jobs including 2,001 going to local people. However, there are counter-reports of significant harm to other local businesses due to the preponderance of chain stores.

The site was formerly occupied by Stratford Works and Locomotive Depot.

To the south of the site lies Stratford station which is served by London Underground's Central and Jubilee lines, Greater Anglia, TfL Rail, London Overground, Docklands Light Railway, and a number of c2c services. The Elizabeth line was scheduled to serve the station from 2018, but has since been postponed. To the north lies Stratford International station, which is served by Southeastern High Speed and Docklands Light Railway services.

According to Westfield, while the site supports a 5,000 space car park, 80% of the shoppers arrive at the centre on public transport.

All content from Kiddle encyclopedia articles (including the article images and facts) can be freely used under Attribution-ShareAlike license, unless stated otherwise. Cite this article:
Westfield Stratford City Facts for Kids. Kiddle Encyclopedia.