Whakatāne ( fah-kə-TAH-nee, alt.) is a town in the eastern Bay of Plenty Region in the North Island of New Zealand, 90 km east of Tauranga and 89 km north-east of Rotorua, at the mouth of the Whakatāne River. Whakatāne District is the encompassing territorial authority, which covers an area to the south and west of the town, excluding the enclave of Kawerau.

Whakatāne forms part of the parliamentary electorate of East Coast, represented by Anne Tolley of the New Zealand National Party. It is the main urban centre of the Eastern Bay Of Plenty sub-region; incorporating Whakatāne, Kawerau, and Opotiki, the Eastern Bay stretches from Otamarakau in the west, to Cape Runaway in the north-east and Whirinaki in the south. It is the seat of the Bay of Plenty Regional Council, chosen as a compromise between the region's two larger cities, Tauranga and Rotorua.

Whakatāne was affected by the 1987 Edgecumbe earthquake.

The site of the town has long been populated. Māori pā (Māori fortified village) sites in the area date back to the first Polynesian settlements, estimated to have been around 1200 CE. According to Māori tradition Toi-te-huatahi, later known as Toi-kai-rakau, landed at Whakatāne about 1150 CE in search of his grandson Whatonga. Failing to find Whatonga, he settled in the locality and built a pa on the highest point of the headland now called Whakatāne Heads, overlooking the present town. Some 200 years later the Mataatua waka landed at Whakatāne.

The name "Whakatāne" is reputed to commemorate an incident occurring after the arrival of the Mataatua. The men had gone ashore and the canoe began to drift. Wairaka, a chieftainess, said “Kia Whakatāne au i ahau” (“I will act like a man”), and commenced to paddle (which women were not allowed to do), and with the help of the other women saved the canoe.

The region around Whakatāne was important during the New Zealand Wars of the mid 19th century, particularly the Volkner Incident. Its role culminated in 1869 with raids by Te Kooti's forces and a number of its few buildings were razed, leading to an armed constabulary being stationed above the town for a short while. Whakatāne beach heralded an historic meeting on 23 March 1908 between Prime Minister Joseph Ward and the controversial Māori prophet and activist Rua Kenana Hepetipa. Kenana claimed to be Te Kooti's successor. 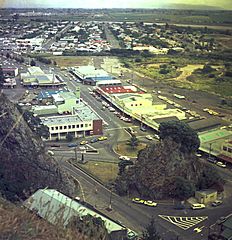 The town was a notable shipbuilding and trade centre from 1880 and with the draining of the Rangitikei swamp into productive farmland from 1904, Whakatāne grew considerably. In the early 1920s it was the fastest growing town in the country for a period of about three years and this saw the introduction of electricity for the first time. The board mill at Whakatāne began as a small operation in 1939 but has grown over the years, it continues operating to this day.

The Whakatāne River once had a much longer and more circuitous route along the western edge of the Whakatāne urban area, having been significantly re-coursed in the 1960s with a couple of its loopier loops removed to help prevent flooding and provide for expansion of the town. Remnants of the original watercourse remain as Lake Sullivan and the Awatapu lagoon. The original wide-span ferro-concrete bridge constructed in 1911 at the (aptly named) Bridge Street was demolished in 1984 and replaced by the Landing Road bridge.

Whakatāne has in recent years benefited from its relative dominance over numerous smaller and less prosperous towns surrounding it, such as Te Teko (affectionately known as 'Texas') and Waimana, and its popularity as a retirement and lifestyle destination.

Heavy rain struck the Bay of Plenty and Whakatāne on 16–18 July 2004 causing severe flooding and resulting in a state of civil emergency being declared. Many homes and properties were flooded, forcing thousands of Whakatāne residents to evacuate. The Rangitaiki River burst its banks, flooding large areas of farmland, and numerous roads were closed by floods and slips. A total of 245.8 mm of rain fell in Whakatāne in the 48-hour period and many small earthquakes were also felt during this time, loosening the sodden earth and resulting in landslips that claimed two lives. These were the first earthquake deaths in New Zealand for nearly 40 years.

Whakatāne frequently records the highest sunshine hours in New Zealand by the National Institute of Water and Atmospheric Research (NIWA)- with 2703 (in 2008), 2561 (2010), 2602 (2012) and 2792 (2013) hours of sunshine respectively. However, the 2008 recorded hours were disputed because of abnormally high results in only the second year of official monitoring. The town recorded an average of over 7.5hrs of sunshine a day in 2013 Whakatāne also records the national daily high (temp) on approximately 55 days of the year. 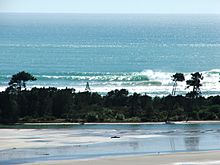 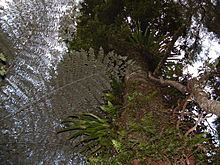 Rainforest near Whakatāne is renowned for its biodiversity

Moutohorā Whale Island is a small island off the Bay of Plenty coast about 12 kilometres north of Whakatāne. The island has numerous sites of pā. It also provided shelter for James Cook's Endeavour in 1769. A whaling station existed on the island during the 19th century.

Whakatāne is the gateway to Whakaari/White Island, an active marine volcano located 48 kilometres offshore. The mouth of the Whakatāne River and Ohiwa Harbour have both provided berths for yachts, fishing trawlers and small ships since European settlement of the area. Ōhope Beach is a sandy beach stretching 11 km (7 mi) from the Ohiwa Harbour entrance.

Whakatāne has a friendship agreement with Shibukawa, Gunma, Japan.

All content from Kiddle encyclopedia articles (including the article images and facts) can be freely used under Attribution-ShareAlike license, unless stated otherwise. Cite this article:
Whakatane Facts for Kids. Kiddle Encyclopedia.