Wharram Percy is a deserted medieval village (DMV) in North Yorkshire, England. It has been settled since prehistory, but was largest during the 10th through 12th centuries. The Domesday Book talks about it, and says that it was called 'Warran' or 'Warron'. It was owned by the Percy family of aristocrats. Around the year 1400, it came under the ownership of the Hylton family of aristocrats. They decided to use the land in and around the village for sheep, because it made more money back then. In the early 16th century, the last part of the village was destroyed to make room for sheep pasture. 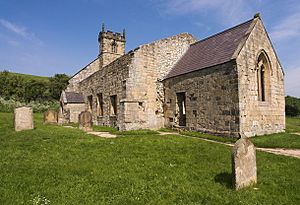 Ruin of St Martin's parish church, which was the main church in Wharram Percy

All content from Kiddle encyclopedia articles (including the article images and facts) can be freely used under Attribution-ShareAlike license, unless stated otherwise. Cite this article:
Wharram Percy Facts for Kids. Kiddle Encyclopedia.