White Lick Creek is a 47.7-mile-long (76.8 km) stream in central Indiana in the United States. It flows from its source in Boone County, near Fayette, into the White River near Centerton.

White Lick Creek is named for a mineral lick which attracted deer. In the past the stream had various names: East Lick Creek, White Lick River, Whitelick Creek and Whitelick River. 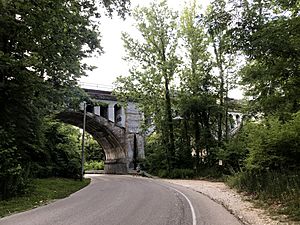 According to an urban legend, just south of U.S. Highway 36 between Danville and Avon, there is a railroad bridge that is haunted by the ghost of an Irish immigrant. "Dad" Jones was hired to help build a former bridge that once stood. During the construction he died brutally, and it is said that his spirit still occupies the area.

As legend goes, the work had progressed up to the point when the workers were pouring concrete into wooden frames. One day "Dad" Jones was on a wooden platform above a framework that was being filled when all of sudden the platform broke. His fellow workers had to helplessly watch "Dad" Jones sink deeper and deeper into the concrete. It is said that the workers could hear him pounding his fists against the sides of the framework until he finally suffocated.

The construction company and co-workers were puzzled as to what to do with his remains. The company eventually made the decision it would more economic and also too difficult to remove his body from the dried concrete block. Even though his co-workers rejected to continue to build the bridge with his body located inside, the company pushed for the construction to be finished.

Years after the completion of the bridge, locals reported they could still screams and pounding coming from a specific concrete pylon. Eventually the original bridge was torn down, and a new bridge was built. The remains of the old bridge can be found near the new one. Still today locals say they can hear screams and pounding coming from the bridge.

All content from Kiddle encyclopedia articles (including the article images and facts) can be freely used under Attribution-ShareAlike license, unless stated otherwise. Cite this article:
White Lick Creek Facts for Kids. Kiddle Encyclopedia.