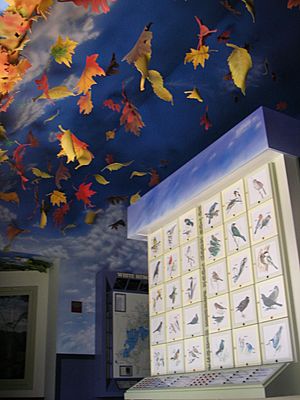 The museum outlines the impact humans have had on the region, beginning with the Peantam group of the Potatuck tribe, the growth and decline of European-American agriculture, and the legacy of Alain and May White.

There are various displays of common animals found in some of the habitats on White Memorial Foundation property, including fields, wetlands, lakes, old-growth forests, hardwood forests, and backyard habitats. Several displays were designed by American diorama painter and designer, James Perry Wilson, who also designed dioramas for the American Museum of Natural History's Hall of Mammals.

The Children's Corner has books, games, and toys designed to teach youngsters about the natural environment. There are also several interactive identification quizzes.

The museum features a working honeybee hive, several live reptiles, and a birdfeeder viewing area. There is also an outside area where visitors can see Barred Owls and Red-tailed Hawks that are unable to survive in the wild.

Other museum areas include:

The White Memorial Conservation Center has been involved in a wide variety of research and conservation studies, ranging from limnology and forestry to ornithology and ichthyology. The Center has partnered with outside groups such as the Connecticut Agricultural Experiment Station, the State of Connecticut Department of Energy and Environmental Protection, Yale University, and the University of Connecticut, in addition to research conducted solely by Center staff.

Currently, the Conservation Center is involved in New England cottontail management, invasive species control, and breeding bird censuses, among many other projects. The Center maintains the Research and Conservation Blog to keep the public up to date on current research and conservation projects.

Educational topics range from studies of pond life to animal adaptations to geology, and often involve a hands-on approach. Guided walks tend to focus on specific habitats or groups of animals found on the property. While many of the educational programs occur on White Memorial Foundation property, others (including summer classes for older students) involve trips to locales across Northwestern Connecticut so participants can see the larger picture of ecosystems, geology, and landforms.

All content from Kiddle encyclopedia articles (including the article images and facts) can be freely used under Attribution-ShareAlike license, unless stated otherwise. Cite this article:
White Memorial Conservation Center Facts for Kids. Kiddle Encyclopedia.