White Swan is a census-designated place (CDP) in Yakima County, Washington, United States. The population was 3,033 at the 2000 census.

White Swan is an unincorporated community located on the Yakama Indian Reservation, presumably named after Chief White Swan of the Yakamas around the start of the 20th century. The town was on the Mt Adams Highway (an overland road between Yakima and The Dalles beginning in the 1850s) between Union Gap and Fort Simcoe. In September 1921, the Christian Church (Disciples of Christ.) (DOC) opened the Yakima Indian Christian Mission. For an accurate history of the Mission see the book by Keith Watkins titled God's Presence. In 1967, the former child-care facilities of the Mission were leased to the Sundown M Corporation. Using the registered cattle brand of the Mission (from the years it owned cattle),ima the Sundown M Ranch began serving recovering alcoholics in 1968. Pacific Power & Light Company first brought electricity to the community in 1928. The White Swan Library (a branch of the Yakima Valley Regional library) was established in 1947. It was moved to a donated facility in 1969 where it stands today. White Swan is part of the Mt Adams School District #209, and home of White Swan High School. The town has never been formally incorporated. 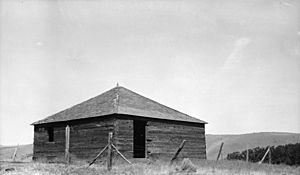 The Blockhouse at Fort Simcoe dating from around 1858

This region experiences warm (but not hot) and dry summers, with no average monthly temperatures above 71.6 °F. According to the Köppen Climate Classification system, White Swan has a warm-summer Mediterranean climate, abbreviated "Csb" on climate maps.

There were 775 households out of which 49.4% had children under the age of 18 living with them, 55.2% were married couples living together, 18.6% had a female householder with no husband present, and 15.0% were non-families. 10.8% of all households were made up of individuals and 4.0% had someone living alone who was 65 years of age or older. The average household size was 3.91 and the average family size was 4.15.

All content from Kiddle encyclopedia articles (including the article images and facts) can be freely used under Attribution-ShareAlike license, unless stated otherwise. Cite this article:
White Swan, Washington Facts for Kids. Kiddle Encyclopedia.