Whitefish (Salish: epɫx̣ʷy̓u, "has whitefish") is a city in Flathead County, Montana, United States. The population was 6,357 at the 2010 census. It is home to a ski resort on Big Mountain called Whitefish Mountain Resort. Former Montana Governor Brian Schweitzer is from Whitefish.

The Great Northern Railway was built through what is now Whitefish in 1904, which sparked development of the town. The area was originally known as Stumptown due to the abundant amount of timber that had to be cleared to build the town and railroad. Early residents of the town worked for the railroad and nearby logging industries. By the late 1940s, with the successful construction of a ski resort on Big Mountain (a collaboration between outside developers and local businessmen) the tourism sector was becoming increasingly important. The community was named for its location near Whitefish Lake.

In 2006, over 68,000 passengers embarked and disembarked through the historic Whitefish Depot, a stop on Amtrak's Empire Builder line, with some percentage of those being headed to the ski resort on Big Mountain.

In December 2016, the neo-Nazi and white supremacist website The Daily Stormer published a list of six local Jews in the city along with their personal information, claiming that they were harming the business of Richard Spencer's mother and asking readers to "take action" against them. Whitefish police increased local patrols, and monitored Internet activity; Montana politicians and community groups responded with various efforts to focus attention on the question of antisemitism. On Dec. 28, 2016, Spencer indicated that he did not want to bring ongoing national attention to Whitefish with his political views, and an offer was made to call off a proposed anti-Jewish armed march in the town. The march was postponed because the proper permitting materials were not submitted and the required fee was not paid.

This climatic region is typified by large seasonal temperature differences, with warm to hot (and often humid) summers and cold (sometimes severely cold) winters. According to the Köppen Climate Classification system, Whitefish has a humid continental climate, abbreviated "Dfb" on climate maps. 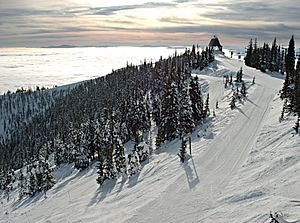 View from top of Big Mountain, near Whitefish, in winter

There were 2,229 households out of which 26.2% had children under the age of 18 living with them, 41.2% were married couples living together, 9.8% had a female householder with no husband present, and 46.0% were non-families. 34.4% of all households were made up of individuals and 10.9% had someone living alone who was 65 years of age or older. The average household size was 2.20 and the average family size was 2.86.

There were 2,982 households of which 24.5% had children under the age of 18 living with them, 40.1% were married couples living together, 8.5% had a female householder with no husband present, 3.8% had a male householder with no wife present, and 47.6% were non-families. 36.7% of all households were made up of individuals and 11.4% had someone living alone who was 65 years of age or older. The average household size was 2.10 and the average family size was 2.77.

The Taste of Whitefish is an annual event that has been held for more than twenty-five years. The event features over twenty-five restaurants, caterers and beverage companies offering samples of their specialties.

The World Indoor Golf Championship has been held in Whitefish for over sixteen years and is a 9-hole "miniature golf" tournament in downtown Whitefish.

In 2018 Whitefish will host the annual convention of the National Speleological Society. 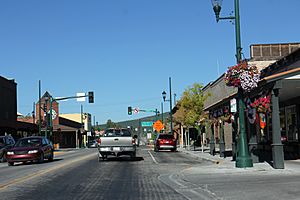 All content from Kiddle encyclopedia articles (including the article images and facts) can be freely used under Attribution-ShareAlike license, unless stated otherwise. Cite this article:
Whitefish, Montana Facts for Kids. Kiddle Encyclopedia.