William Abram Mann (July 31, 1854 – October 8, 1934) was a general officer in the United States Army. He served as the commander of the 17th Infantry Brigade in the Spanish–American War and the 42nd Division "The Rainbow Division") in World War I.

After he retired from military service, he became an executive at the Equitable Trust Company of New York. He resided in Washington D.C., until his death on October 8, 1934.

A World War II troop carrier was named for him. The USS W. A. Mann (AP-112), was commissioned in 1943 and served in World War II, the Korean War, and the Vietnam War.

Mann was born on July 31, 1854, in Altoona, Pennsylvania, the son of Anna (Bockus) Mann and Charles J. Mann. Charles J. Mann was an attorney and judge, and served as mayor of Altoona from 1884 to 1886. William A. Mann attended the schools of Altoona and obtained an appointment to the United States Military Academy. He graduated in 1875 and received a commission as a second lieutenant of Infantry.

He served in the western United States throughout the 1870 and 1880s, mostly in assignments with the 7th Cavalry. As part of the 17th Infantry Regiment, he took part in the Sioux Indian campaign of 1890 to 1891.

Mann served with the 17th Infantry Regiment in the Spanish–American War, participating in the Battle of El Caney and the Siege of Santiago. He received a Silver Star for gallantry in action at El Caney. Mann also served in the Philippines in 1899 and the early 1900s. He graduated from the Army War College in 1905. 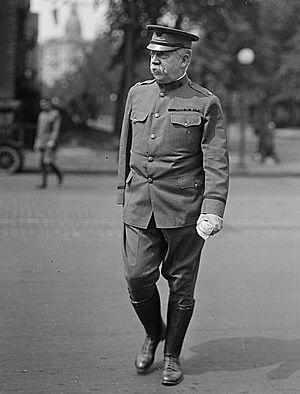 Mann circa 1917, probably as head of the Militia Bureau

From 1907 to 1909 Mann commanded the 6th Infantry Regiment at Fort William Henry Harrison, Montana, also temporarily commanding the Department of Dakota on several occasions. From 1910 to 1911 he commanded the Recruit Depot at Jefferson Barracks, Missouri.

From 1914 to 1915 Mann commanded the 3rd Infantry Regiment at Madison Barracks, New York, and in 1915 he was assigned as commander of 1st Brigade, Department of the East in Albany, New York, receiving promotion to brigadier general.

In 1916 General Mann assumed command of the 2nd Cavalry Brigade in Texas during the Pancho Villa Expedition, and later took command of the School of Musketry and Field Artillery at Fort Sill, Oklahoma.

In 1917 he was named to head the Army's Militia Bureau (now the National Guard Bureau), receiving promotion to major general.

Mann was within a year of mandatory retirement in November 1917 when the division in St. Nazaire, France. He began to suffer from poor health after the organization moved to its new location at Vaucouleurs in Lorraine, making chief of staff Colonel Douglas MacArthur the de facto commander. After Mann's superior John J. Pershing made an on-site visit and observed Mann's infirmities, he cabled the War Department requesting that Mann be relieved. Mann returned to the United States and commanded the Department of the East until he retired in July 1918.

After leaving the military Mann became an executive at the Equitable Trust Company of New York.

In retirement Mann resided in Washington, D.C., and he died there on October 8, 1934. He was buried at Arlington National Cemetery, Section 3, Site 1996.

The USS General W. A. Mann (AP-112), a World War II troop carrier, was named for him. The General Mann was commissioned in 1943, used in World War II, the Korean War and the Vietnam War, and remained in service until 1965.

All content from Kiddle encyclopedia articles (including the article images and facts) can be freely used under Attribution-ShareAlike license, unless stated otherwise. Cite this article:
William Abram Mann Facts for Kids. Kiddle Encyclopedia.