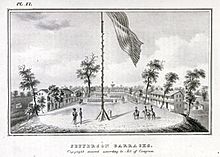 Jefferson Barracks during the occurrence of the Mexican-American War.

Jefferson Barracks at the time of the Civil War.

Soldiers of Battery A from Jefferson Barracks.

Battery A going to target practice at Guayama, Puerto Rico.

Troops Leaving Jefferson Barracks to deploy to the east coast and onward to France.

In 1826 General Edmund P. Gaines (Commander of the Western Department of the Army), Brig. General Henry Atkinson (commanding officer of the sixth infantry regiment), explorer William Clark, and Missouri Governor John Miller spent several days searching the banks of the Mississippi River for the perfect location for a new post to replace Fort Bellefontaine. A site near the city of "Vide Poche" or Carondelet, ten miles (16 km) south of St. Louis, was recommended and then approved by Major General Jacob J. Brown, Commanding General of the Army.

On July 10, 1826, two days after the deed to the land was signed, the first military troops—six officers and 245 enlisted men of Companies A, B, H and I, commanded by Brevet Major Stephen Watts Kearny—arrived at the new post and started building temporary quarters that they named Cantonment Miller in honor of Governor Miller. In 1827 the military post was formally named Jefferson Barracks in honor of Thomas Jefferson who had died the year before. Even William Clark's son, Meriwether Lewis Clark, Sr., would join the ranks of Jefferson Barracks. It was also designated the first "Infantry School of Practice."

In 1832, the United States Regiment of Dragoons were formed and stationed at Jefferson Baracks. The dragoons, trained to fight mounted or dismounted, were the first unit of permanent cavalry in the United States Army and were later called the 1st U.S. Dragoons.

Jefferson Barracks became a major military post during the Mexican–American War (1846–1848) when it served as a rest and supply station for most U.S. troops deploying to Mexico. Jefferson Barracks was the recruiting center for outfitting and training most of the regiments organized for the Mexican War in 1846, and upon the return of the triumphant U.S. forces in 1848, many were deployed to Jefferson Barracks due to its strategic location and healthful situation.

In 1853, newly elected President Franklin Pierce, who had served as a brigadier general during the Mexican War, appointed Jefferson Davis as his Secretary of War.

During the American Civil War (1861–1865), Jefferson Barracks served as a military hospital for both sides and a recruitment depot for the North. In 1862 construction of the Western Sanitary Commission's hospital facilities began at Jefferson Barracks. By the time that the hospital complex was complete, it could hold 3,000 patients. By the end of the first year of the war, over 5,000 sick and wounded had been admitted and, by the end of the war, well over 18,000 soldiers had been treated at Jefferson Barracks Hospital. In 2002, The Missouri Civil War Museum was founded, which is still being restored today. The MCWM is being brought to life in the old 1905 Post Exchange Building.

With the declaration of the Spanish–American War in 1898, many regular army and volunteer regiments were, once again, formed and outfitted at Jefferson Barracks. Jefferson Barracks was permanently designated as a recruiting depot in 1906, despite the fact that it had been used as such intermittently throughout its use through generations.

On March 1, 1912 Jefferson Barracks involves its place in the world as the main base for the first aviation parachuting. Albert Berry became the first person to ever successfully parachute from an airplane, which was being flown by Anthony Jannus over the field.

During World War I, Jefferson Barracks served as a training and recruitment station for soldiers heading to Europe.

During the 1930s, the Citizens Military Training Camp or CMTC was held at Jefferson Barracks. Young men could spend one month a year at the post being trained as a soldier, and after three years they could enter the military. Also during that time the Works Progress Administration (WPA) had camps at Jefferson Barracks.

During World War II, Jefferson Barracks was a major reception center for U.S. troops being drafted into the military. It also served as an important basic training site for the Army, then later was the first Army Air Corps Training Site. Elements of the Central (later Eastern) Technical Training Command were stationed at the barracks.

Jefferson Barracks was decommissioned as a military post in 1946 with the end of World War II.

After Jefferson Barracks was decommissioned, portions of the grounds were sold off for construction of houses. Some of the barracks were acquired by the St. Louis County Housing Authority as temporary low-cost housing. Those were demolished in the 1960s and replaced by the current Jefferson Townhomes development. Bishop DuBourg High School was located on the Jefferson Barracks property for several years in the early 1950s. The former Jefferson Barracks School is now used for storage and maintenance; and the former theater is St. Bernadette Catholic Church.

It is now the site of two St. Louis County Parks (Jefferson Barracks County Park and Sylvan Springs County Park), a National Guard Base (Army and Air), the Jefferson Barracks National Cemetery and a Veterans Administration hospital. Part of the hospital grounds were donated to the Mehlville School District in the 1960s to build Charles S. Beasley Elementary School.

Today, the 135-acre National Guard post at Jefferson Barracks is home to the 70th Troop Command, the Missouri Army National Guard's largest brigade. The post is also headquarters for the Region 7 Homeland Response Force; the Missouri Air National Guard's 157th Air Operations Group and the 10th Psychological Operations Battalion of the U.S. Army Reserve. Beginning in late 2012, military intelligence operations will begin in building 27; these operations will be similar to those occurring at existing locations on both coasts.

During the 1960s and 1970s, portions of Jefferson Barracks County Park were used as a landfill. During the 1980s, an annual balloon race was held in the park. Today, because of its large size, high school cross country races are often held in the park in the fall months, most notably the Hancock Invitational.

The Missouri Civil War Museum opened in the park in 2013. Displays focus on the state's role during the American Civil War and include weapons, equipment, medical equipment, photographs and uniforms.

Besides its extensive collection of telephones manufactured from the 1900s through the 2000s, the Jefferson Barracks Telephone Museum also contains a working Central Office Step Switch, military telephones from World War II through the Vietnam War, hundreds of pieces of telephone-related equipment and tools, a telephone pole complete with climbing equipment, hundreds of pieces of telephone-related memorabilia from the 1880s through the 2000s, a large variety of novelty telephones, a special portable switchboard set up when U.S. Presidents Carter, Ford, Nixon and Johnson were visiting St. Louis and a sculpture of Alexander Graham Bell and history of the invention of the telephone.

The self-guided, accessible museum has many hands-on, how-things-work displays.

All content from Kiddle encyclopedia articles (including the article images and facts) can be freely used under Attribution-ShareAlike license, unless stated otherwise. Cite this article:
Jefferson Barracks Military Post Facts for Kids. Kiddle Encyclopedia.