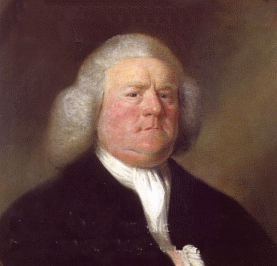 William Boyce (born London, 11 September 1711; died Kensington, 7 February 1779) is one of the most important English composers of the 18th century. He was composing during the last years of the Baroque period and the early years of the Classical Period. He is famous for his church music as well as music for the theatre and orchestral music.

Boyce was born in the City of London. His father was a cabinetmaker.

Boyce was a choirboy at St Paul's Cathedral and then studied music with Maurice Greene after his voice broke. When he had finished his studies he got a job as organist at the Earl of Oxford’s chapel in Cavendish Square. Two years later he went to St Michael’s Cornhill. He was still studying music, now his teacher was Pepusch.

Boyce wrote songs for Vauxhall Gardens. Many people would have heard these songs. He became composer to the Chapel Royal in 1736. This was a great honour. He wrote several big works, although we do not know much about them or about their performances. Some time during the 1740s he composed a theatre work called The Secular Masque. The words were by John Dryden. In 1749 he was given the title of Doctor of Music after a performance of his anthem O be joyful.

Boyce was very famous by now. He went to live in a large house in Chancery Lane. He seems to have married and started a family. He was asked to compose for the theatre in Drury Lane. It is surprising he had not been asked to write theatre music before. It may be because he was going deaf. This would have made it difficult for him to rehearse his music with the orchestra.

Boyce wrote a good deal of music for the theatre. There seems to have been some rivalry with the composer Thomas Arne. Probably the composers themselves did not want this rivalry, it was encouraged by their supporters.

In 1755, when Maurice Green died, William Boyce was made Master of the King's Music in his place. He was expected to compose odes for every New Year and for the King’s birthday. He did this for the rest of his life.

Not much of Boyce’s works were published during his lifetime. He wrote eight symphonies. The earlier ones are in a Baroque style. Later his style started to change to become more Classical, but by the time he was very deaf he could not hear new music that was being composed by other people, so his style did not develop any more. He spent a lot of his time putting together a collection of church music called Cathedral Music. It included music from two centuries of English church music, especially music by John Blow, Henry Purcell, Pelham Humfrey and Orlando Gibbons. He encouraged singers to sing with a score in front of them (music which shows all the singing parts) instead of just the part that they sing, so that they could see how their part fitted in with the others. This is normal today, but it was a new idea at the time. He had to spend a lot of his time writing unimportant music for the king which was unlikely ever to be performed more than once.

Boyce is best known for his eight symphonies, his anthems and his odes. He also wrote the masque Peleus and Thetis and songs for John Dryden's Secular Masque, incidental music for William Shakespeare's The Tempest, Cymbeline, Romeo and Juliet and The Winter's Tale, and a lot of chamber music including a set of twelve trio sonatas. He also composed the British and Canadian Naval March "Heart of Oak". The lyrics were later written by David Garrick. His music is always skilfully written, especially his fugues and dances.

Boyce was largely forgotten after his death. In the 19th century he was known mainly for editing Cathedral Music. Today some of his orchestral and instrumental pieces are often played.

All content from Kiddle encyclopedia articles (including the article images and facts) can be freely used under Attribution-ShareAlike license, unless stated otherwise. Cite this article:
William Boyce Facts for Kids. Kiddle Encyclopedia.