Wind River Peak (13,197 feet (4,022 m)) is the highest point in the southern end of the Wind River Range that is located in the U.S. state of Wyoming. The peak straddles the Continental Divide and is surrounded by National Forest lands. The west slopes are in the Bridger Wilderness of Bridger-Teton National Forest, while the east side is in the Popo Agie Wilderness of Shoshone National Forest. In a cirque on the northeast slopes of the peak lies Wind River Glacier. 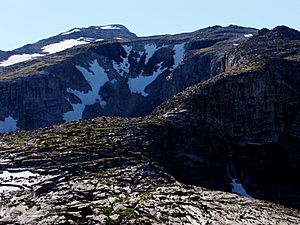 Wind River Peak near its base above Leg Lake in 2008 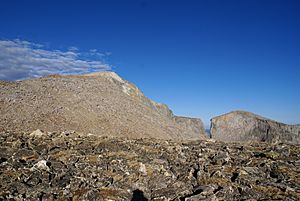 Wind River Peak, as seen from near Chimney Rock on the ascentwiki
Main pages: Hazards of outdoor recreation and Mountaineering#Hazards

All content from Kiddle encyclopedia articles (including the article images and facts) can be freely used under Attribution-ShareAlike license, unless stated otherwise. Cite this article:
Wind River Peak Facts for Kids. Kiddle Encyclopedia.