Based on archeological evidence, this area was occupied by various cultures of indigenous peoples from as early as the Archaic period, about 1500 BC. Blair Mound is a nearby archeological site and earthwork likely occupied 1300-1400 AD, as part of the late Mississippian culture in the region.

Several years before the Revolutionary War, Richard Winn from Virginia moved to what is now Fairfield County in the upland or Piedmont area of South Carolina. His lands included the present site of Winnsboro, and as early as 1777 the settlement was known as "Winnsborough". Two of his brothers joined him there, adding to family founders.

The village was laid out and chartered in 1785 upon petition of Richard Winn, John Winn and John Vanderhorst. The brothers Richard, John and Minor Winn all served in the Revolutionary War. Richard was a general, said to have fought in more battles than any Whig in South Carolina. John was a colonel. See Fairfield County, South Carolina, for more.

The area was developed for the cultivation of short-staple cotton after Eli Whitney's invention of the cotton gin in 1793, which made processing of this type of cotton profitable. Previously it was considered too labor-intensive. Short-staple cotton was widely cultivated on plantations in upland areas throughout the Deep South, through an interior area that became known as the Black Belt. The increased demand for slave labor resulted in the forced migration of more than one million African-American slaves into the area through sales in the domestic slave market. By the time of the Civil War, the county's population was majority black and majority slave.

"Winnsboro Cotton Mill Blues", an industrial folk song of the 1930s with lyrics typical of the blues, refers to working in a cotton mill in this city. Textile mills were constructed in the area beginning in the late 19th century, and originally workers were restricted to whites. The song developed after the textile mill had been converted to a tire manufacturing plant, reflecting the widespread expansion of the auto industry. The song has been sung by Lead Belly, Pete Seeger, and other artists. It was the basis of one of the ballads by modernist composer/pianist Frederic Rzewski in his Four North American Ballads for solo piano, completed in 1979.

In the late 19th century after white Democrats regained control of state legislatures in the South, they passed laws establishing racial segregation of public facilities and disenfranchising blacks, excluding them from the political system. In 1960 in the United States Supreme Court decision of Boynton v. Virginia, the court ruled that racial segregation was unconstitutional in interstate bus stations, restaurants, bathrooms and on buses, as these were covered by constitutional protections of free interstate commerce. The Civil Rights Movement had begun to use public demonstrations and events to build public awareness.

In 1961, CORE decided to test the bus ruling by sending mixed racial groups of Freedom Riders to ride interstate buses and use facilities in the segregated southern United States to challenge practices related to segregation of buses and bus stations. They intended to travel through the Deep South and end at New Orleans. They were met by increasing violence as they went south. Winnsboro was one of the cities where some Freedom Riders were beaten by local whites and arrested by local officials. One was rescued by a local African-American man while outrunning a white mob.

According to the United States Census Bureau, the town of Winnsboro has a total area of 3.2 square miles (8.4 km2), all land. 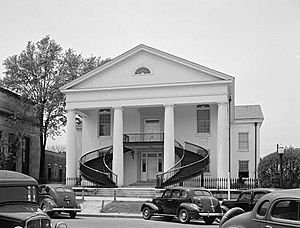 The Fairfield County Courthouse in 1940 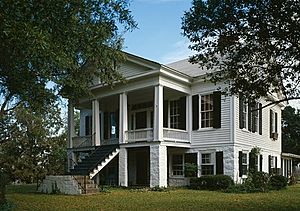 Tocaland is one of twenty-one sites in Winnsboro listed on the National Register of Historic Places.

There were 1,454 households out of which 33.2% had children under the age of 18 living with them, 37.7% were married couples living together, 25.4% had a female householder with no husband present, and 32.3% were non-families. 29.7% of all households were made up of individuals and 14.0% had someone living alone who was 65 years of age or older. The average household size was 2.46 and the average family size was 3.04.

All content from Kiddle encyclopedia articles (including the article images and facts) can be freely used under Attribution-ShareAlike license, unless stated otherwise. Cite this article:
Winnsboro, South Carolina Facts for Kids. Kiddle Encyclopedia.