Wolves in Ireland facts for kids 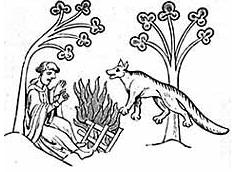 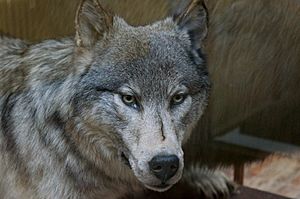 Preserved wolf in the National Museum of Ireland – Natural History 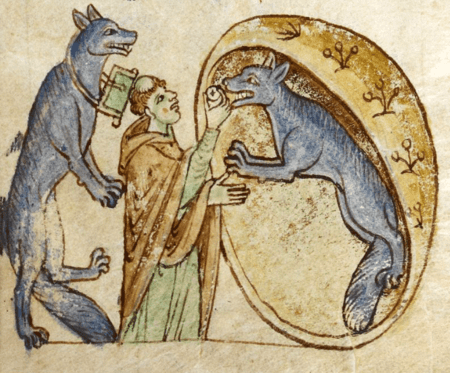 Depiction of the Werewolves of Ossory, from Topographia Hibernica by Gerald of Wales, c. 1200

Wolves feature prominently in Irish mythology. Airitech was a mysterious creature whose three daughters were werewolf-like creatures, eventually killed by Cas Corach. The Irish word for wolf is Mac Tíre meaning literally "Son of the Country(side)" and association with human transformation linger, and whilst some consider this is imported there are many references in Irish mythology to lycanthropes and changing to other animal forms.

The Morrígan was said to take on the form of a red-furred wolf, particularly in her battle with the hero Cú Chulainn. Mac Cecht killed a wolf feeding on a still-living woman on a battlefield. Cormac mac Airt was said to have been raised by wolves, and that he could understand their speech. Four wolves would accompany him in his rebellion against Lugaid mac Con, and he would later be accompanied by them until the end of his life.

The Annals of the Four Masters claims that, in AD 690, "It rained a shower of blood in Leinster this year. Butter was there also turned into lumps of gore and blood, so that it was manifest to all in general. The wolf was heard speaking with human voice, which was horrific to all."

One tale describes how in AD 1182, a priest travelling from Ulster into Meath encountered a talking wolf, which revealed itself to be a man of Ossory, whose ancestors had been cursed to turn into wolves every seven years and return to their human form after another seven years had passed. The wolf explained that his wife, who was also under the curse, was dying, and he pleaded with the priest to give her the viaticum. The priest complied, and was later put on the right road to Meath by the grateful wolf.

The grey wolf (Canis lupus) is a canine of the order Carnivora, an apex predator largely feeding on ungulates.

The earliest radiocarbon date for Irish wolf remains come from excavated cave sites in Castlepook Cave, north of Doneraile, County Cork, and dates back to 34,000 BC. Wolf bones discovered in a number of other cave sites, particularly in the counties of Cork, Waterford and Clare indicate the presence of wolves throughout the Midlandian ice age which probably reached its peak between 20,000 BC and 18,000 BC.

By about 14,000 BC Ireland became separated from Great Britain, which, itself, still formed part of mainland Europe, to become an island. Wolves were one of just a few species of land animal in Ireland that survived through the Nahanagan Stadial, a cold period that occurred between 10,800 BC and 9500 BC.

Wolves were a major part of Ireland's postglacial fauna, as evidenced by their prominence in ancient Irish myths and legends, in a number of place names (both Irish and English), in archaeological sites, along with a considerable number of historical references.

Among one of the earliest historic references to wolves attacking people in Ireland occurs in the Annals of Tigernach under the year AD 1137: The Blind one of ... that is, Giolla Muire, was killed by wolves.

Under the year AD 1420 in the Annála Connacht is the statement "Wolves killed many people this year."

The port books of Bristol record between a yearly average of between 100 and 300 wolfskins exported from Ireland throughout the 1500s and a total of 961 skins in a single year. Pilib Ó Súilleabháin Béirre (c. AD 1590 – 1660), writing of Ireland and particularly Munster after the end of the Nine Years' War, described the aftermath: THUS the war was finished. Ireland was almost entirely laid waste and destroyed, and terrible want and famine oppressed all, so that many were forced to eat dogs and whelps: many not having even these, died. And not only men but even beasts were hungry. The wolves, coming out of the woods and mountains, attacked and tore to pieces, men weak from want. The dogs rooted from the graves rotten carcases partly decomposed. And so there was nought but abundance of misery ...

Throughout most of the first half of the 17th century, Ireland had a substantial wolf population of not less than 400 and maybe as high as 1,000 wolves at any one time. One of the nicknames used for Ireland at this time was “wolf-land”.

The first instance of legislation against Irish wolves dates back to 1584 when John Perrot, the Lord Deputy of Ireland, ordered Robert Legge to come up with a scheme to encourage the destruction of problem wolves. Further records of legislation occur in 1610 and 1611. In 1614, an Englishman named Henric Tuttesham was offered £3 for every wolf that he killed. The wolf population at the time was high enough for Tuttesham to be authorised to keep four men and 24 hounds in every county for seven years, a total of 128 men and 768 hounds.

The bulk of anti-wolf legislation occurred during the decade following the Cromwellian conquest of Ireland. A number of writers from this time period suggest that as a result of ongoing military campaigns in Ireland, particularly the Cromwellian wars of AD 1641-1652 and the devastation of much of the country and, with increasing numbers of farmed animals, wolf numbers were increasing and seen as a threat to business.

The level of rewards and bounties established by Oliver Cromwell's regime attracted a few professional wolf hunters to Ireland, mostly from England. Politically, the prospect of numbers of armed Irish roaming around the country hunting wolves was not acceptable, given the ongoing conflict between the Irish and the new English settlers, so it was seen as much safer for the English authorities to encourage men from their own country to deal with the wolf problem. The problems caused by wolves were considered serious enough by Cromwell's government to impose a ban on the exportation of Irish Wolfhounds.

In AD 1652 the Commissioners of the Revenue of Cromwell's Irish Government set substantial bounties on wolves, £6 for a female, £5 for a male, £2 for a subadult and 10 shillings for a cub. In the same year, measures were taken for the destruction of wolves in the Barony of Castleknock, county Dublin. A grand total of £243 5s 4d was paid for wolf kills in Galway, Mayo, Sligo and part of Leitrim formerly within the precinct of Galway in AD 1655 or AD 1665, depending on the author.

Between the period July 1649 and November 1656 the total amount of bounty paid out for wolf kills in Ireland as a whole was £3,847 5s. Galway, Mayo, Sligo and part of Leitrim had proportionately more wolves than the rest of the country, given that large tracts of this area were relatively untouched by humans. A Captain Edward Piers was leased land over a five-year period in Dunboyne, County Meath on the condition that he kill 14 wolves and 60 foxes. In the 1690s Rory Carragh was hired to kill the last two wolves in one part of Ulster and was equipped with a boy and two wolf dogs. The last reliable observation of a wolf in Ireland comes from County Carlow when a wolf was hunted down and killed near Mount Leinster for killing sheep in 1786.

In 2019, Green Party leader Eamon Ryan called for the reintroduction of wolves to help rewild the countryside and control deer numbers; however the Irish government has no plans to do so at this time .

All content from Kiddle encyclopedia articles (including the article images and facts) can be freely used under Attribution-ShareAlike license, unless stated otherwise. Cite this article:
Wolves in Ireland Facts for Kids. Kiddle Encyclopedia.