Wondai /ˈwɒndaɪ/ is a town and locality in the South Burnett Region of Queensland, Australia. The town is located to the south of the Bunya Highway, 241 kilometres (150 mi) north west of the state capital, Brisbane. In the 2011 census, Wondai had a population of 2,127 people. 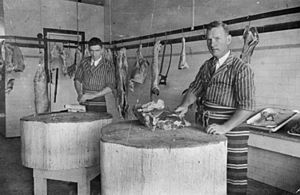 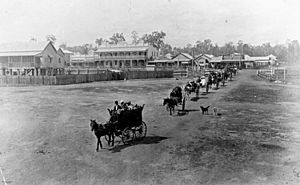 A funeral procession in Wondai, ca. 1915

The name Wondai is believed to be an aboriginal word from the Waka language derived from either watya meaning dingo (a native dog) or wandar meaning nape of the neck.

Wondai was first settled in the 1850s and closer settlement took place in the early 1900s.

Important industries include beef, dairy, grains and duboisia, used in the production of the antispasmodic drug butylscopolamine. Growing in importance is the wine industry.

Attractions in Wondai include Boondooma Dam, an artificial lake formed by the damming of the Boyne River.

Wondai was also home to the legendary pacer Wondai's Mate.

The South Burnett Regional Council operates a library in Wondai.

Wondai has a number of heritage-listed sites, including:

All content from Kiddle encyclopedia articles (including the article images and facts) can be freely used under Attribution-ShareAlike license, unless stated otherwise. Cite this article:
Wondai Facts for Kids. Kiddle Encyclopedia.