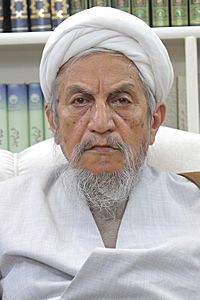 Grand Ayatollah Yousef Saanei (Persian: يوسف صانعى; October 1937 – 12 September 2020) was an Iranian Twelver Shi'a cleric and politician. He was a member of the Islamic Republic of Iran's powerful Guardian Council from 1980 to 1983 and also Attorney-General of Iran from 1981 to 1989. He was born in Isfahan, Iran.

Saanei died on 12 September 2020 in Qom, Iran from kidney failure caused by diabetes at the age of 82.

All content from Kiddle encyclopedia articles (including the article images and facts) can be freely used under Attribution-ShareAlike license, unless stated otherwise. Cite this article:
Yousef Saanei Facts for Kids. Kiddle Encyclopedia.