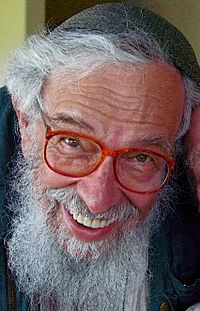 Zalman M. Schachter-Shalomi (August 28, 1924 – July 3, 2014), also known as Reb Zalman, was an American rabbi and educator. He was one of the founders of the Jewish Renewal movement. He was committed to the Gaia hypothesis, to feminism, and to LGBT people within Judaism.

Schachter-Shalomi was born in Zhovkva, Poland (now Ukraine) and raised in Vienna, Austria. He and his family fled the rising power of Nazi Germany for the United States in 1941. He was married to Eve Ilsen.

Schachter-Shalomi died after a long illness on July 3, 2014 in Boulder, Colorado. He was 89.

All content from Kiddle encyclopedia articles (including the article images and facts) can be freely used under Attribution-ShareAlike license, unless stated otherwise. Cite this article:
Zalman Schachter-Shalomi Facts for Kids. Kiddle Encyclopedia.