ZooMontana is a 70-acre (28 ha) wildlife park located in Billings, Montana, U.S. and is Montana's only zoo and botanical park. It currently maintains nearly 100 animals, representing 58 species. These animals all live in habitats designed to imitate their natural habitats. The zoo was incorporated and established as a non-profit 501 C (3) organization in 1982. It focuses on year-round wildlife native to Montana, the Rocky Mountains, and other cold temperature regions at or above the 45th Parallel. Indoor habitats include animals from around the world. The zoo hosts over 80,000 visitors per year. Canyon Creek runs through the center of the zoo's grounds, creating a natural and tranquil park-like setting. 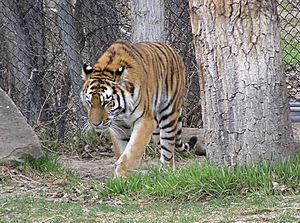 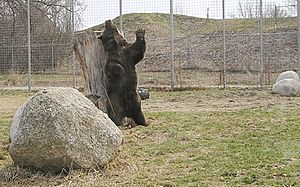 ZooMontana is divided into two main "regions" in addition to other exhibits. The Asia Region starts by the wolves and is a paved path through a cottonwood forest. The path splits at one point and one half becomes a nature trail. The other path splits again, one going towards the Siberian tiger, and the other going to the red panda.

The Barn is home to mostly domesticated animals, including Belgian draft horses, pygmy goats, peafowl, rabbits, and goats. During the warmer months, the turkey vulture may be found here as well.

Zoo guests also may visit the ponds and feed the koi for a small fee.

Beginning in 2016, the zoo will have new exhibits featuring takin, wolverines, bison, and raptors. 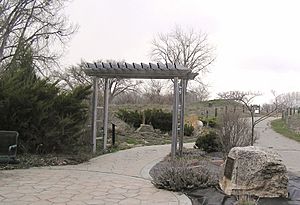 The one-acre Sensory Garden is planted with both native and exotic plants intended to stimulate all of your senses. It is a very popular site for weddings. The zoo also includes a Montana garden with native plants, and Dottie's Garden, which is home to plants that use very little water.

ZooMontana is home to ZooSchool Preschool, an independent preschool which holds classes within the zoo.

The Science and Conservation Center is an independent non-profit organization that is headquartered at the zoo. The center produces and distributes a wildlife contraceptive vaccine, and maintains records and data required by the Food and Drug Administration and Environmental Protection Agency. Working with the Contraception Advisory Group of the AZA at the Saint Louis Zoo, the center coordinates, and in some cases carries out, application of the contraceptive to wildlife.

In March 2014, ZooMontana experienced flooding, and "more than three feet of water covered some of the zoo’s paths."

All content from Kiddle encyclopedia articles (including the article images and facts) can be freely used under Attribution-ShareAlike license, unless stated otherwise. Cite this article:
ZooMontana Facts for Kids. Kiddle Encyclopedia.