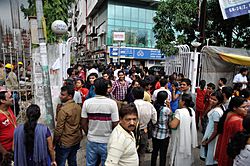 On 25 April 2015, a 7.8 (Mw) earthquake happened in central Nepal. The earthquake also affected parts of India, Bangladesh, and the Tibet Autonomous Region of China. Tremors were also felt in Bhutan and Pakistan. Twenty-six aftershocks were reported. It was the largest earthquake to hit Nepal since the 1988 Nepal earthquake and the Nepal–Bihar earthquake.

Reason why it took place.

It is because of the collision of Eurasian plate with the Indian Plate. It forms the convergent boundary.

Effects and more about the earthquake.

An earthquake of magnitude 7.8 on Richter scale rocked Nepal, with its epicenter in east of Kathmandu. The quake had occurred around 12:30 pm with a depth of 10 km. Entire North and East India felt the tremors.

Calamities caused by the earthquake.

More than 8,019 deaths have been reported in Nepal. More than 1,000 of them were in Kathmandu Valley. In India, 78 people died. In China, 25 died. In Bangladesh, four people died. More than 18,946 others were injured. Several people from outside the area were killed in the earthquakes.

The earthquake caused an avalanche on Mount Everest. The avalanche killed at least 19 people. One of them was Google engineer Dan Fredinburg. Kathmandu Durbar Square, a UNESCO World Heritage Site, was destroyed, as was the Dharahara tower built in 1832, Manakamana Temple in Gorkha, and the northern side of Janaki Mandir.

A second major earthquake, 7.3 (Mw), hit Nepal and parts of India on 12 May 2015. The Epicenter of the quake was 18km (11mi) south-east in Kodari, Nepal, while tremors were felt in North India also.

At least more than 8,126 people died and another 17,803 others were injured by the earthquake.

All content from Kiddle encyclopedia articles (including the article images and facts) can be freely used under Attribution-ShareAlike license, unless stated otherwise. Cite this article:
2015 Nepal earthquake Facts for Kids. Kiddle Encyclopedia.