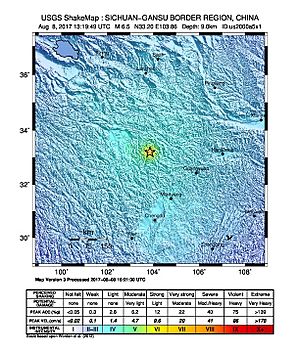 The distribution of the strength of this earthquake, where the centre of the earthquake is labelled with a star (USGS)

The China Earthquake Administration said that the graph showed that the strength of earthquake could be higher than level IX, and the earthquake centre in Zhangzha County could reach level VIII.

The China Earthquake Administration put up a Level I reaction. It later changed to Level II. They sent the army to the earthquake area for rescue. At 21:26 CST (UTC+8), Health and Family Planning Commission of Sichuan Province started an emergency plan. The medical rescue team was going to head to the earthquake area within one hour. The Red Cross Society of China, Sichuan Branch was on emergency standby (ready to act immediately), preparing for rescue. Early the next day, China's State Council Earthquake food-supply headquarters started national level Ⅱ earthquake emergency response.

At 06:20 CST on 9 August, a Shuajingsi Town (刷经寺镇) militia vehicle had a traffic collision with a Sichuan F (Deyang) coach in Hongyuan County, Ngawa Prefecture. Three people from the coach were injured and were being medically treated.

Until 9 August 2017, there were 40 people seriously injured. Seven of them were moved to other hospitals, four to West China Hospital of Sichuan University, and the rest to Jiuzhaigou County Hospital and Zhongzang Hospital.

The Emergency Management Office of the Ngawa Prefecture, Sichuan Province said that until 13:10 CST on 9 August, the 7.0-magnitude earthquake in Zhangzha Town in Jiuzhaigou County killed 19 people and injured 247 people, including 40 people critically injured. The following day, the deaths rose to 20 with over 400 injured. Deaths and injuries mainly occurred in Zhangzha Town in Jiuzhaigou County. 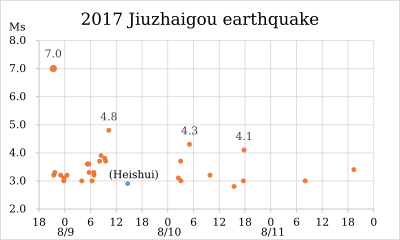 As of 10 August 2017 10:00 CST (UTC+8), 1741 aftershocks had occurred. That included 30 major ones. Some experts said that the aftershocks might reach a magnitude of 6 after several days. The major aftershocks reported by China Earthquake Networks Center are listed below:

All content from Kiddle encyclopedia articles (including the article images and facts) can be freely used under Attribution-ShareAlike license, unless stated otherwise. Cite this article:
2017 Jiuzhaigou earthquake Facts for Kids. Kiddle Encyclopedia.