Gangwon was the only preferred host. Other cities such as Brașov, Granada, and Sofia were interested to hold the competition but was not preferred. They held talks with IOC and the Future Host Commission. Gangwon was officially chosen during 135th IOC Session in Lausanne, Switzerland on 10 January 2020.

Pyeongchang (in Gangwon) was chosen as host of the 2024 Winter Youth Olympics. This was announced on 10 January 2020 at the 135th IOC Session in Lausanne, Switzerland. The city meets all of the requirements set by the IOC and Executive Board. 82 members were eligible to vote. 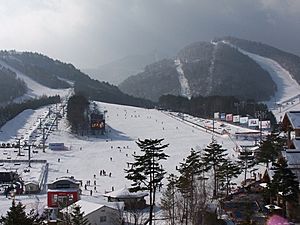 The Alpensia Sports Park in Daegwallyeong-myeon, Pyeongchang will be the main venue of the games.

There will be another outdoor venue at Bongpyeong-myeon, Pyeongchang:

One other venue for outdoor sports will be in neighboring Jeongseon county:

Gangneung Olympic Park is located in the neighborhood of Gyo-dong. The neighbourhood is in Gangneung city. The park includes four indoor sports venues. All four venues are close to one another.

All content from Kiddle encyclopedia articles (including the article images and facts) can be freely used under Attribution-ShareAlike license, unless stated otherwise. Cite this article:
2024 Winter Youth Olympics Facts for Kids. Kiddle Encyclopedia.