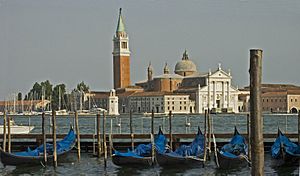 The 6th G7 summit was a meeting in 1980 for the leaders of Canada, the European Commission, France, Germany, Italy, Japan, the United Kingdom and the United States.

The international group of leaders were together in Italy on June 22-23. The meetings were held in Venice.

The Venice summit of the Group of Seven (G7) was the 6th meeting in a series which began in 1976.

This was the first G7 summit hosted by Italy.

Japanese Prime Minister Masayoshi Ohira had a fatal heart attack only 10 days before the summit. The Foreign Minister led the Japanese delegation.

The G7 leaders agreed to work together to break the link between oil consumption and economic growth. Medium- and long-term policies were identified as important issues.

All content from Kiddle encyclopedia articles (including the article images and facts) can be freely used under Attribution-ShareAlike license, unless stated otherwise. Cite this article:
6th G7 summit Facts for Kids. Kiddle Encyclopedia.