Aaron James Ramsey (born 26 December 1990) is a Welsh footballer. He plays as a midfielder for Juventus and the Wales national football team. 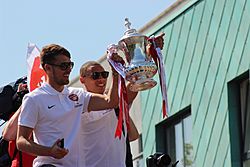 Ramsey with the FA Cup trophy

All content from Kiddle encyclopedia articles (including the article images and facts) can be freely used under Attribution-ShareAlike license, unless stated otherwise. Cite this article:
Aaron Ramsey Facts for Kids. Kiddle Encyclopedia.