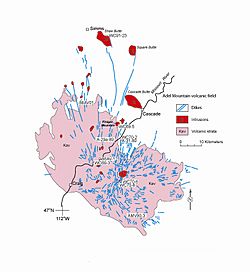 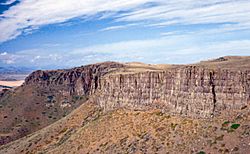 Northwest view of Square Butte, a laccolith in the Adel Mountains Volcanic Field.

The Adel Mountains Volcanic Field is a 3,280-foot (1,000 m) thick unit which lies unconformably on top of Cretaceous sedimentary rock of the Two Medicine Formation on the edge of the Great Falls Tectonic Zone. The extrusive rock is composed of breccia and conglomerate. The intrusive rock has formed numerous dikes, sills, and plugs. An "enormous number of dikes...emanate radially from its center", many of which are visually striking and vertical, and can be seen from the interstate highway and other roads in the area. Many of the dikes clearly fed laccoliths in the area. Two concentric rings of laccoliths lie in the northwest section of the field 11 miles (18 km) and 14 miles (23 km) from the center of the area. Square Butte, Shaw Butte (near the town of Ft. Shaw), and Cascade Butte (next to the town of Cascade) are three laccoliths belonging to the Adel field which are famous local landmarks. More than 2,000 feet (610 m) of rock which used to exist on top of Square Butte has subsequently eroded to reveal the igneous rock which forms the laccolith. Each laccolith was fed by a radial dike at its distal end where it rolled over from vertical to form the horizontal laccolith. Laccoliths spread from the end of their feeder dike towards the more-elongate axis of the parent volcano, in response to load-imposed stresses of the volcano.

The age of the Adel Mountain Volcanic Field has been re-estimated several times since 1944. Based on fossil evidence, Lyons estimated in 1944 that the formation was late Cretaceous in origin, making it about 66 million years old. This estimate was reinforced in the early 1970s. /> But separate analyses made in 1991 and 2004 re-estimated the rock as having formed in the late Cretaceous, about 81 to 71 million years ago. Most estimates today place the age at 75 million years. The Adel volcanics are part of the Laramide orogeny, a period of mountain building in western North America which began about 80 million years ago and ended about 35 million years ago. The age of the volcanism and thrusting overlap, with some intrusions being affected by the thrusting while others were intruded into already formed thrust horses.

Magma welled up from below for several million years, creating the Adel volcanics as well as the nearby Highwood Mountains and Judith Mountains. The crustal weakness associated with the Great Falls Tectonic Zone may have provided a route for the magma to reach the surface. Magma which never made it to the surface nonetheless created the many dikes, sills, plugs, and laccoliths which can be seen in the Adel volcanic field.

Scientists have studied the Adel Mountains Volcanic Field for a number of reasons. Several teams of scientists have analyzed the polar wander path to study continental drift. Others have looked at the possibility of petroleum or other hydrocarbons under the field, and concluded there is a strong possibility they exist there. 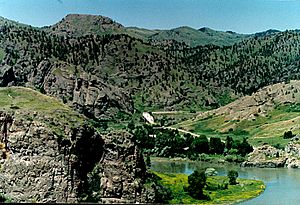 Adel Mountains Volcanic Field about 30 miles southwest of Great Falls, Montana, USA. The Missouri River can be seen in the lower right hand corner of the image. The Hardy Bridge is in the center of the image.

The final scenes of the 1974 motion picture Thunderbolt and Lightfoot was filmed on and next to Interstate 15 as it passed through the Adel volcanics. A portion of the 1987 movie The Untouchables was shot at the Hardy Bridge in the Adel Mountains Volcanic Field, which doubled for the U.S.-Canada border.

Motion picture star Gary Cooper was raised on the Seven Bar Nine Ranch, which was located in the Adel Mountains.

The eruption that formed the Adel Mountains Volcanic Field is depicted in the third episode of the American TV series Dinosaur Planet.

All content from Kiddle encyclopedia articles (including the article images and facts) can be freely used under Attribution-ShareAlike license, unless stated otherwise. Cite this article:
Adel Mountains Volcanic Field Facts for Kids. Kiddle Encyclopedia.