The Air Force Armament Museum, adjacent to Eglin Air Force Base, Florida, is the only facility in the U.S. dedicated to the display of Air Force armament. Founded in 1975, it was originally located in a converted gymnasium on the northeastern edge of the Eglin main base, adjacent to Valparaiso, Florida.

Visitors can view a variety of historical Air Force planes, from a World War II B-17 bomber to an F-4 Phantom II jet. A wide variety of bombs, missiles, and rockets are exhibited, including the newest air-to-air missile, the AMRAAM, and the GBU-28 bunker-buster developed for use during Operation Desert Storm. Other missiles include the Paveway series, Falcons, the Tomahawk, Mace, Hound Dog, radar-controlled, laser-controlled and several guided by a TV camera in the nose. Also on display is the GBU-43 MOAB, Massive Ordnance Air Blast bomb, or by its nickname, "Mother of All Bombs", the world's largest conventional explosive weapon. A predecessor, the T-12 Cloudmaker 38,600 lb. earthquake bomb, is displayed outside, while a Fat Man casing is indoors.

A gun vault displays a variety of weapons ranging from a 1903 Springfield rifle to the GAU-8, which is capable of shooting 6,000 rounds per minute. Featured are the Sikes Antique Pistol Collection, with over 180 handguns, including flintlocks, duelling pistols, Western six-shooters, Civil War pistols, and a wide variety of early military weaponry.

Discussion of the founding of a facility dedicated to the history of the development of armaments began at Eglin Air Force Base in 1972 with manpower considerations being circulated in early fall, with a plan approved in 1974. A former World War II-era gymnasium turned Enlisted Club near the old main gate to Valparaiso was adapted in 1975–1976 for the initial collection. Exhibits included the CGM-13 Mace missile, the F-84F, the F-101B, the B-17 Flying Fortress, and the B-25 Mitchell that had been displayed in Valparaiso-Niceville since 1960. Also popular was a Ryan Model 47 Firebee painted as a shark. A SPAD S.XIII, one of six survivors of the type, marked as '1' as flown by Captain Eddie Rickenbacker of the 94th Aero Squadron, on loan from Dolph Overton's Wings and Wheels Museum, Santee, South Carolina, was displayed from 1976 until the original building was closed. The museum occupied these wooden quarters until the structure was condemned in 1981, and the museum was closed in October.

The AFAM Foundation, incorporated in 1976 as an IRS 501(c)(3) philanthropic non-profit organization, began searching for a new site while raising funds for a new building. By mid-1985, $1.2 million in private and corporate donations had been raised, and construction of a new 28,000-square-foot (2,600 m2) museum was underway. In November of the same year, the new museum was deeded to the United States Air Force and opened to the public. The museum recorded more than one million visits by June 1995. The foundation is currently trying to raise $1.5 million for a new educational annex.

The Friends of the Museum is a membership program in which members' dues help fund the museum. Members receive discounts in the gift shop and notice of special events.

The Foundation sponsors the education program Engineers for America, which involves a school classroom tour of the museum with basic engineering experiments led by teachers and volunteers. The goal of the program is to stimulate in young people a desire to pursue a career in engineering. 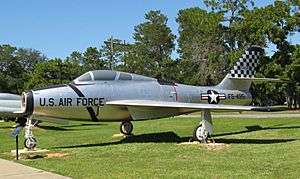 All content from Kiddle encyclopedia articles (including the article images and facts) can be freely used under Attribution-ShareAlike license, unless stated otherwise. Cite this article:
Air Force Armament Museum Facts for Kids. Kiddle Encyclopedia.