The island's name is Swampy Cree for "land across the water".

The island has no year-round human inhabitants; however, it is part of the Attawapiskat First Nation's traditional territory and is frequently used for traditional purposes. The surface of Akimiski is flat and slopes gradually to the north. Most of the vegetation that covers the island consists of lichen, moss, sedges, and dwarf black spruce. The island is a coastal wetland that includes mudflats, tidal marshes, and tidal mudflats. Freshwater streams that flow into southwestern James Bay carry sediments and abundant nutrients that help to sustain the productive waterfowl habitat around Akimiski Island. 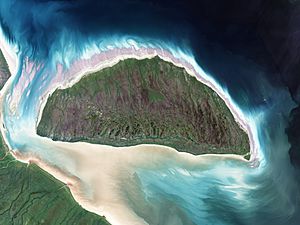 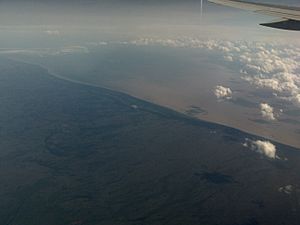 Photo of western coast, viewed from north towards south, in mid-July

The coastal waters and wetlands of Akimiski Island (and James Bay in general) are important feeding grounds for many varieties of migratory birds. Notable species include:

Because James Bay and Hudson Bay are funnel-shaped, migrating birds from the Arctic concentrate in this area. During fall migration, an abundance of birds with both adults and young are present. In the springtime, the birds tend to reside in the southern areas of James Bay until the northern section thaws.

Among mammals, ringed seals, polar bears, and beluga whales can be found in the area.

All content from Kiddle encyclopedia articles (including the article images and facts) can be freely used under Attribution-ShareAlike license, unless stated otherwise. Cite this article:
Akimiski Island Facts for Kids. Kiddle Encyclopedia.