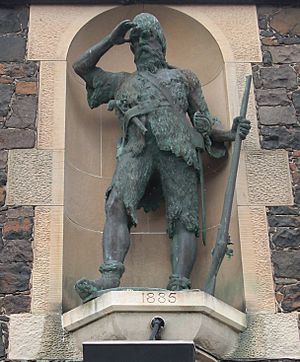 Alexander Selkirk, (1676 - 13th December 1721) also known as Alexander Selcraig, was a Scottish sailor. He became famous for his amazing story of survival and is likely to have inspired Daniel Defoe to write the book Robinson Crusoe.

He was on an expedition when the captain of the ship, Captain Stradling, left him on an island off the coast of Chile. Selkirk's job on board was the navigator. He controlled where the ship needed to go and where it was at that point in time. He had an important job. He tried to warn the captain about certain repairs that were needed but the captain ignored Selkirk and carried on sailing. Selkirk knew the ship was to drown at any given moment and tried to demand the repairs were taken care of but nobody listened. They had stopped at an island to restock fresh water and supplies. Selkirk said he would rather stay on the island than continue to ride on a dangerous, leaky ship. So there he was left. He had last minute second thoughts and tried to get back onto the ship but Stradling refused. Selkirk was marooned on that island for about four years and had to rely on himself and his skills for survival.

At the time of his rescue, he had been gone for about four years. He was very familiar with crafting things himself out of resources on the islands and having to use his survival skills. He heard noises and when he went to find out what it was, he saw ships on the horizon. He didn't know if they were on his side or enemies but he knew he had to try. He got their attention and so they sailed over to his island. Once they had beached on the shore, Selkirk came out from the bushes with his hands up. It turned out they were English and on his side. They let him aboard their ship and they were at sea for another year, stopping off at a few places, before returning to England.

When he returned, his story was written down by a person in his town and has been made into a slightly different version by Daniel Defoe who named it Robinson Crusoe. 'Robinson Crusoe' has been rewritten many times by lots of different people. There were some differences like how Crusoe was stranded for over twenty years and Selkirk, four. Even though this story was based off Selkirk, the exact island he was deserted on was renamed Robinson Crusoe Island after previously being called Juan Fernández Island.

The book is a major piece of literature which is important in the history of English and the beginning of the popularity of novels.

All content from Kiddle encyclopedia articles (including the article images and facts) can be freely used under Attribution-ShareAlike license, unless stated otherwise. Cite this article:
Alexander Selkirk Facts for Kids. Kiddle Encyclopedia.