Alexandria or Fort Alexandria is a National Historic Site of Canada on the Fraser River in British Columbia, and was the end of the Old Cariboo Road and the Cariboo Wagon Road. It is located on Highway 97, 103 miles (166 km) north of 100 Mile House and 28 miles (45 km) south of Quesnel.

On June 21, 1793, explorer Alexander MacKenzie reached the shores of the First Nations village at what would become Alexandria. He was told by the people of the village that the river was not safe for navigation beyond that point. Mackenzie heeded their advice and he and his party turned around and returned upriver to what would become the town of Quesnellemouth, (later Quesnel) and continued on to Bella Coola. In 1821, the North West Company erected a fort at Alexandria, the last the company would build before it was merged the same year with the Hudson's Bay Company. The fort was named Alexandria in honour of Alexander Mackenzie. They also built a grainery and wintered their horses there. Alexandria became a key way station along the Hudson's Bay Brigade Trail. 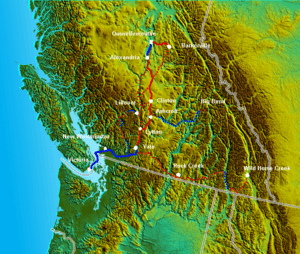 Route of the Cariboo Road in red. Steamboat travel in blue; dotted lines are alternate routes or routes to other goldfields

By 1859, in response to the gold discoveries that would ultimately set off the Cariboo Gold Rush, Alexandria had grown from a simple Hudson's Bay post to a large tent community of miners and AD McInnes bought some of the HBC property at Alexandria to build a roadhouse that would serve travellers on the Old Cariboo Road once the road's construction was completed in 1863.

When the road was completed as far as Alexandria, the road-builder Gustavus Blin Wright launched his sternwheeler Enterprise at Alexandria. The Enterprise would ferry passengers and supplies up the Fraser River to Quesnel. From Quesnel, a wagon road was built in 1864 so travellers could continue on to Barkerville.

Another road to the gold fields had been planned to Alexandria, this one from Bute Inlet by entrepreneur Alfred Waddington. However, this road would never be built and its plans would be the harbinger of tragedy. In the spring of 1864, when members of the Tsilhqot'in (Chilcotin) First Nations learned of the plans to build the road through the Homathko River Valley to the gold fields at Barkerville, they feared both infringement on their territory and the increased threat of smallpox, (an epidemic that had already killed many of their people) and eight Tsilhqot'in men, led by Klatsassin, attacked one of Waddington's work camps, killing fourteen road construction workers.

All content from Kiddle encyclopedia articles (including the article images and facts) can be freely used under Attribution-ShareAlike license, unless stated otherwise. Cite this article:
Alexandria, British Columbia Facts for Kids. Kiddle Encyclopedia.