The Alfred B. Maclay State Gardens is a 1,176-acre (4.76 km2) Florida State Park, botanical garden and historic site, located in Tallahassee, in northeastern Florida. The address is 3540 Thomasville Road.

The gardens are also a U.S. historic district known as the Killearn Plantation Archeological and Historic District. It received that designation on August 16, 2002. According to the National Register of Historic Places, it contains 18 historic buildings, 4 structures and 4 objects.

The property associated with Maclay was part of the Lafayette Land Grant. In antebellum times, it was part of the Andalusia Plantation, growing cotton. Starting in 1882 a vineyard on the property produced wine, until Leon County voted to go dry in 1904. After that it was a quail-hunting estate called Lac-Cal.

In 1923, New York financier Alfred Barmore Maclay (1871–1944), the son of Robert Maclay, and his wife, Louise Fleischman, purchased the 1,935 acres (783 ha) Lac-Cal quail-hunting plantation and adjoining land, creating a 3,760 acres (1,520 ha)-estate he called Killearn, after his ancestral village and birthplace of his great-grandfather in Scotland. Maclay developed the gardens continuously until his death. His wife continued their development, opened them to the public in 1946, and in 1953 donated some 307 acres (1.24 km2) of their estate, including the gardens, to a predecessor of the Florida Department of Environmental Protection. In 1965 the gardens were renamed in Maclay's honor, to avoid confusion with the new adjacent development called Killearn Estates. 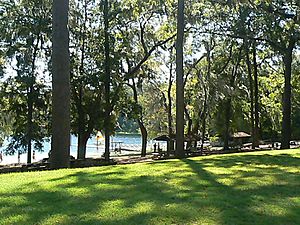 The 1909 Maclay House has been furnished to appear as during the residence of the Maclays. The house is open for tours during high blooming season from January through April.

The park has such amenities as bicycling, birding, boating, canoeing, fishing, hiking, horse trails, kayaking, picnicking areas, extensive walking trails, and swimming. It also has a museum with interpretive exhibits.

Other activities available at the Maclay Gardens include: self-guided tours (aided by a Gardens Walking Tour brochure, available at the ranger station), Walking and Running, and Wildlife Viewing.

Alfred B. Maclay Gardens State Park is also committed to providing a variety of accessible amenities to all of its visitors, including: Audio tour, Beach Mobi-mat, Beach wheelchair, Golf cart tour with advance notice, and Motorized wheelchair and manual wheelchair.

The gardens are open daily; an entrance fee is charged all year. Opens at 8am closes at sunset.

All content from Kiddle encyclopedia articles (including the article images and facts) can be freely used under Attribution-ShareAlike license, unless stated otherwise. Cite this article:
Alfred B. Maclay Gardens State Park Facts for Kids. Kiddle Encyclopedia.