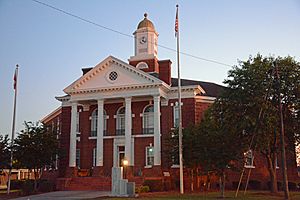 Alma is a city in Bacon County, Georgia, United States, and the county seat. As of the 2010 census, the city had a population of 3,466.

Alma is known as Georgia's blueberry capital, and hosts a Blueberry Festival each June.

Alma was founded in 1900 as a stop on the Atlantic Coast Line Railroad. It was incorporated as a city in 1906 and designated seat of the newly formed Bacon County in 1914. There are two theories about the origin of the name of the town. The first is that it was named for the wife of a traveling salesmen, Alma Sheridan; the other is that it was named for the initial letter of the four state capitals Georgia has had: Augusta, Louisville, Milledgeville, and Atlanta.

There are four sites in Alma listed on the National Register of Historic Places: Alma Depot, Bacon County Courthouse, Bacon County School, and the Rabinowitz Building.

Alma is served by the Bacon County School District. The district has 126 full-time teachers and over 1,900 students, and operates these schools:

All content from Kiddle encyclopedia articles (including the article images and facts) can be freely used under Attribution-ShareAlike license, unless stated otherwise. Cite this article:
Alma, Georgia Facts for Kids. Kiddle Encyclopedia.