Alpine Meadows is a ski resort in the western United States, located in Alpine Meadows, California. Near the northwest shore of Lake Tahoe, it offers 2,400 acres (9.7 km2) of skiable terrain, 13 different lifts, and a vertical drop of 1,802 feet (549 m).

JMA Ventures, owner of the Homewood Mountain Resort on the west shore of Lake Tahoe, purchased Alpine Meadows from Powdr Corporation in July 2007. In 2011, Alpine Meadows merged with the well-known neighboring ski resort and 1960 Olympic site, Squaw Valley. Ownership transferred largely to the umbrella company Squaw Valley Ski Holdings, LLC. In 2018, this was merged into the Alterra Mountain Company. Today, the two resorts operate as one with a single-season pass and a connecting shuttle for visitors, the Squaw/Alpine Express, though each retains its distinct identity. 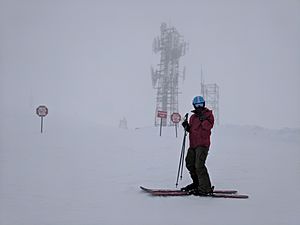 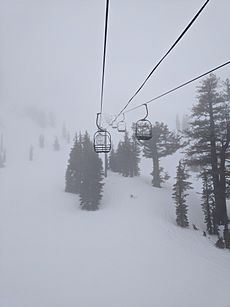 Alpine Meadows opened 61 years ago in 1961. John Reily developed it initially as the Ward Peak Ski Resort, and had a vision to develop the terrain into a ski resort as an alternative to Squaw Valley. With the help of Peter Klaussen and a number of families who pooled resources to develop the area, Alpine Meadows was founded in 1958 and opened in 1961. The idea for the resort was to focus more on the pleasure of skiing than business profit. It was thought that the idea for the resort came about after the resort’s founders visited Squaw Valley during the 1960 Olympics and noticed the potential of the adjacent terrain. Alpine Meadows opened for the 1961–62 season with three lifts.

The resort made headlines 40 years ago in 1982 after an early spring avalanche hit its base area in the late afternoon of March 31 and killed seven. One survivor was buried for five days.

Alpine Meadows is heavily involved with the North Lake Tahoe/Truckee community. It supports a variety of non-profit organizations with the goal of contributing positively to the local community, particularly through education and environmental protection programs.

Alpine Meadows is an advocate of environmental protection. It engages in projects supporting biodiesel fuel use, has implemented summer native-plant vegetation projects, and has incorporated many recycling programs into its operations. Alpine Meadows, along with Squaw Valley, supports the Truckee River Watershed Council, the Tahoe Fund and Friends of Squaw Creek as part of the company’s community giving through charitable donations or active participation.

Alpine Meadows was featured as the location of the fictional "Alpine College" in the movie Wild Wild Winter. Portions of the movie, including all exterior sequences, were filmed at the resort. The 1966 Universal Pictures comedy was directed by Lennie Weinrib and starred Gary Clarke and Chris Noel.

Alpine Meadows is a partnership inspired by Errol Kerr, a resident of Truckee who has U.S. and Jamaican citizenship. Kerr represented Jamaica in the 2010 Winter Olympics.

All content from Kiddle encyclopedia articles (including the article images and facts) can be freely used under Attribution-ShareAlike license, unless stated otherwise. Cite this article:
Alpine Meadows (ski resort) Facts for Kids. Kiddle Encyclopedia.