Squaw Valley Ski Resort, then known as Squaw Valley, was the host site for the 1960 Winter Olympics. Located in Olympic Valley, California, Squaw Valley Ski Resort covers 3,600 acres (15 km2) employing 30 chairlifts and the only funitel in the United States. It is the second-largest skiing complex in the Lake Tahoe area after Heavenly Mountain Resort

In August of 2020, the owners announced their commitment to remove the word “squaw” from the resort's name by summer 2021 as the use of the term is an ethnic slur.

Alpine runs of the
1960 Winter Olympics 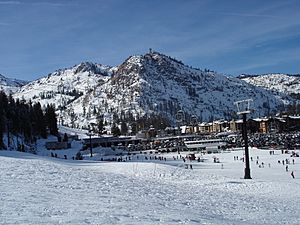 Former University of Nevada star skier, Wayne Poulsen, purchased the first 2,000 acres (8.1 km2) of Squaw Valley Ski Resort from the Southern Pacific Railroad. Poulsen already had a history in the area: in 1931, he had placed third at an Olympic trials at Granlibakken in Tahoe City. Shortly after, Poulsen met Harvard alumnus and trained lawyer Alex Cushing, who brought capital, political connections, and increased access to the project. Cushing had fallen in love with Lake Tahoe after a visit to the Sierra Nevada in 1946. After a disagreement over the resort's future, Cushing gained control of the project and became the chairman of Squaw Valley Ski Corporation. The resort opened in 1949, and Cushing remained its chairman until his death.

Cushing modeled the resort after European ski destinations by locating a swimming pool, ice rink, roller disco, and restaurants on the mountain instead of at the base. His designs also brought advanced lift technology to the U.S. for the first time. When Squaw Valley opened, its Squaw One lift was deemed the longest double chairlift in the world.

Squaw Valley's success can be largely attributed to the visibility that came from hosting the 1960 Winter Olympics, a direct result of Cushing's effort and determination. During the planning stages of the 1960 Olympics, Innsbruck, Austria, was the leading choice for the Olympic site. In 1955, however, Cushing secured the bid after winning over the International Olympic Committee in Paris with a scale model of his planned Olympic site. The Winter Olympics in 1960 were the first to be televised live, making the games accessible to millions of viewers in real-time. The event signaled the rise of U.S. skiing to the level of world-famous European skiing, and Squaw Valley's preparedness for the games showed the international community that U.S. ski resorts offered world-class facilities.

Squaw Valley hosted World Cup races in 1969 with four technical events: slalom and giant slalom for both men and women. American Billy Kidd won the men's slalom, followed by U.S. teammates Rick Chaffee (4th) and Spider Sabich (10th) of Kyburz. The 1969 season saw a record snowpack at Squaw Valley; and over eight feet (2.4 m) of new snow cancelled the downhills. After an absence of 48 years, women's technical races returned in 2017 and overall leader Mikaela Shiffrin of Colorado won both events.

In 1971, following several years of financial losses, the state announced they would seek bids to buy Squaw Valley. After a failed bid by John Fell Stevenson, Dick Baker and his Australian company Mainline Corporation successfully bid $25 million plus 1,500 acres from the Poulsens. In August 1974 the Australian company Mainline Corporation collapsed and Squaw Valley was again back on the market for sale.

In 1978, Squaw Valley experienced one of the worst cable car accidents in history. On a stormy afternoon late in the season on Saturday, 15 April, the Tram came off of one of its cables, dropped 75 feet (23 m) and then bounced back up, colliding with a cable which sheared through the car; four were killed and 31 injured. 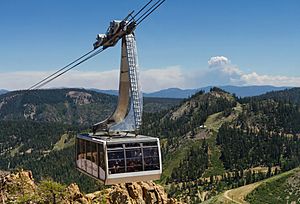 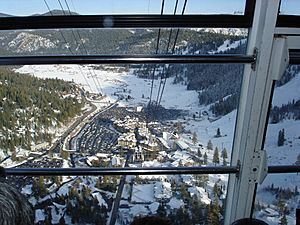 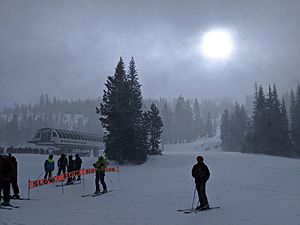 The backside, at the base of Shirley Lake Express, in 2020

Squaw Valley Ski Holdings, LLC seeks to connect the Alpine Meadows (ski resort) with a "Base-to-Base" gondola. Resort owners need permission from local land managers, including Placer County and the Tahoe National Forest who are currently studying the proposed project's environmental impacts. A number of conservation organizations, including Sierra Watch and the Sierra Club, consider the proposed gondola a threat to Granite Chief Wilderness. In July 2019 Sierra Watch and Granite Chief Wilderness Protection League filed a lawsuit with Squaw Valley challenging Placer County's approval of the gondola project. In January 2020 the United States Forest Service issued its Record of Decision approving a route crossing federal lands. In February 2020, the litigants dropped the suit in exchange for Squaw Valley's commitment to implement measures to mitigate the impact towards the Sierra Sierra Nevada yellow-legged frog (an endangered species). The approved gondola is planned to cross the private ski area, White Wolf Mountain, which is owned by Troy Caldwell. Caldwell supports the gondola.

All content from Kiddle encyclopedia articles (including the article images and facts) can be freely used under Attribution-ShareAlike license, unless stated otherwise. Cite this article:
Squaw Valley Ski Resort Facts for Kids. Kiddle Encyclopedia.