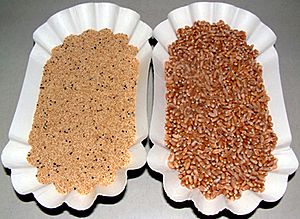 Species belonging to the genus Amaranthus have been cultivated for their grains for 8,000 years. Amaranth plants are classified as pseudocereals that are grown for their edible starchy seeds, but they are not in the same botanical family as true cereals, such as wheat and rice. Amaranth species that are still used as a grain are Amaranthus caudatus L., Amaranthus cruentus L., and Amaranthus hypochondriacus L. The yield of grain amaranth is comparable to rice or maize.

The grain was a staple food of the Aztecs and an integral part of Aztec religious ceremonies. The cultivation of amaranth was banned by the conquistadores upon their conquest of the Aztec nation. However, the plant has grown as a weed since then, so its genetic base has been largely maintained. Research on grain amaranth began in the United States in the 1970s. By the end of the 1970s, a few thousand acres were being cultivated there, and continue to be cultivated.

Much of the amaranth grain currently grown is sold in health food shops. Grain amaranth is also grown as a food crop in limited areas of Mexico, where it is used to make a candy called alegría (Spanish for joy) at festival times. In other preparations, the grain can be popped like popcorn and then either mixed with honey, or served with milk, dried fruit and nuts like a cold breakfast cereal. Amaranth grain can also be used to extract amaranth oil, a pressed seed oil with commercial uses.

There are about 75 species in the genus Amaranthus. Many species of amaranth grain are hardy plants, showing resistance to changes in pH, salt content, environment, temperature, and drought. Amaranth grains have genetic diversity and adaptive ability. 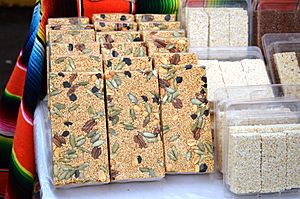 Alegría, a Mexican snackfood made with amaranth grain

The Aztecs cultivated amaranth as a staple grain crop in what is now Mexico during the pre-Columbian period. Amaranth was used by the Aztecs for tamales, tortillas, and atole (hot cereal). In addition they formed shaped images of their gods with amaranth, agave, and maize during the sacred month of Huitzilopochtli. At the end of the month, the statues were eaten by the families to "take the god into them". When the Spanish prohibited religious acts like this, and imposed the religion of their god who was worshiped with wheat, amaranth cultivation decreased. In current Mexican culture on the Day of the Dead, amaranth seeds are offered as snack foods for the spirits. Edible skulls were historically made with amaranth seeds, although today they are made out of sugar.

All content from Kiddle encyclopedia articles (including the article images and facts) can be freely used under Attribution-ShareAlike license, unless stated otherwise. Cite this article:
Amaranth grain Facts for Kids. Kiddle Encyclopedia.