The American Airlines Arena (AAA) is a sports and entertainment multi-purpose arena located in Miami, Florida, along Biscayne Bay. It was constructed beginning in 1998 as a replacement for the Miami Arena and designed by the architecture firms Arquitectonica and 360 Architecture. The Arena is home to the Miami Heat of the National Basketball Association.

The American Airlines Arena is directly served by the Miami Metrorail at Government Center station via free transfers to Metromover Omni Loop, providing direct service to Freedom Tower and Park West stations. The Arena is also within walking distance from the Historic Overtown/Lyric Theatre Metrorail station.

The American Airlines Arena has 2,105 club seats, 80 luxury suites, and 76 private boxes. The Waterfront Theater is Florida's largest theater which is housed within the arena, that can seat between 3,000 and 5,800. The theater can be configured for concerts, family events, musical theatre and other stage shows. American Airlines which has a hub at Miami International Airport maintains the AmericanAirlines Arena Travel Center at the venue.

The airline also holds the naming rights for another NBA venue, the American Airlines Center for the Dallas Mavericks and the Dallas Stars, which opened in 2001.

The American Airlines Arena opened on December 31, 1999, and its construction cost was $213 million. Architectural design team members included George Heinlein, Cristian Petschen, Reinaldo Borges, and Lance Simon. The AmericanAirlines Arena was inaugurated with a concert by Gloria Estefan. Two days later, on January 2, 2000, the Miami Heat played its first game in the new arena by defeating the Orlando Magic 111–103. 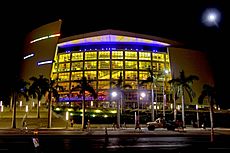 The main façade of the arena at night

As part of its sponsorship arrangement, American Airlines had a giant aircraft painted atop the arena's roof, with an American Airlines logo in the center. The design is visible from airplanes taking off and landing at Miami International Airport, where American has a hub. The arena also has luxury skyboxes called "Flagship Lounges", a trademark originally used for American's premium-class lounges at certain airports.

Local sportscasters often refer to the arena as the "triple-A". Some sports reporters on the local news stations such as WSVN have referred to the arena as "A3" (A cubed). The arena is known for its unusual scoreboard, designed by Artist Christopher Janney. Drawing on the underwater anemone forms, the scoreboard also changes colors depending on the atmosphere. For concerts in an arena configuration, end stage capacity is 12,202 for 180° shows, 15,402 for 270° shows, 18,309 for 360° shows. For center stage concerts the arena can seat 19,146.

The Miami Heat has not had to pay to use the $357-million venue, which sits on $38 million of county land; the county has paid $64 million in operating subsidies. "It was never a good deal," says former Miami-Dade Commissioner Katy Sorenson, who opposed the new arena in 1996. "There are certain politicians who just get stars in their eyes and don't really think about what the real cost is going to be."

WTVJ, the city's NBC owned-and-operated station in Miami, had their Downtown Miami Studios in the back of the arena from 2001 till 2011.

On September 10, 2019, it was reported that American Airlines said that it would not renew its naming rights upon expiration at the end of 2019. The new naming rights contract with a sponsor yet to be determined will be a ten-year/six-month deal lasting from January 1, 2020, to June 30, 2030 (to time with the end of the 2029-30 NBA season). As of December 2020[update], the naming rights have not been sold, and the arena continues to use the AmericanAirlines Arena name. The AmericanAirlines Arena court decals were removed from the Heat's floor before the 2020–21 season and replaced temporarily with the logo of team/league vehicle sponsor Kia Motors. 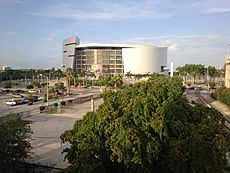 The arena as seen from Freedom Tower station.

Traffic congestion after events can cause delays for those who choose to drive to the arena. Visitors to the AmericanAirlines Arena are encouraged to take Metrorail, Metromover, or Metrobus, as parking can be scarce and expensive. Metromover's Freedom Tower station is located two blocks west of the arena. The nearest Metrorail stations are Government Center and Historic Overtown. The Metromover is free to ride and connects to Metrorail at Government Center station. 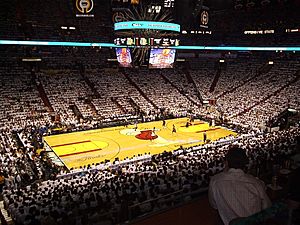 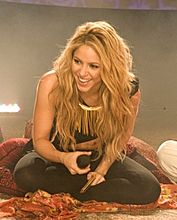 Shakira has performed 9 sold-out shows in AmericanAirlines Arena, the most number of appearances at the venue among all artists. She also holds the record of having most shows in the venue within one single tour, Oral Fixation Tour in 2006, with 5 sold-out shows.

All content from Kiddle encyclopedia articles (including the article images and facts) can be freely used under Attribution-ShareAlike license, unless stated otherwise. Cite this article:
American Airlines Arena Facts for Kids. Kiddle Encyclopedia.