Betula glandulosa, the American dwarf birch, also known as resin birch or shrub birch, is a species of birch native to North America.

It is closely related to the dwarf birch (Betula nana), and is sometimes treated as a subspecies of it, as B. nana subsp. glandulosa. It is distinguished from typical B. nana by the presence of glandular warts on the shoots and longer leaf petioles. Hybrids with several other birches occur. 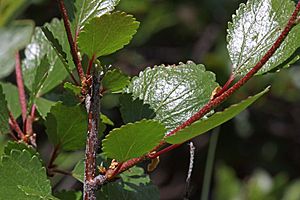 This plant occurs in arctic and cool temperate areas from Alaska east to Newfoundland and southern Greenland, and south at high altitudes to northern California, Colorado, and the Black Hills of South Dakota in the west, and locally south to northern New York in the east. In the Arctic, it occurs down to sea level, while in the south of the range, it grows as high as 3,400 metres (11,200 ft) altitude.

It is typically a wetland species, growing in bogs, muskegs, or other moist and nutrient-deficient soils, but can be found in a wide variety of sites, ranging from rocky subarctic locales to boreal forests with deep, organic-rich soils. It is the most common shrub at treeline in interior Alaska, forming a nearly continuous zone between the treeline and alpine tundra.

American dwarf birch provides cover for ptarmigans, and grizzly bears use it consistently to construct their dens.

This species is valued for its erosion control potential, and has been used to help stabilize stream-banks.

All content from Kiddle encyclopedia articles (including the article images and facts) can be freely used under Attribution-ShareAlike license, unless stated otherwise. Cite this article:
American dwarf birch Facts for Kids. Kiddle Encyclopedia.