Ananke is a retrograde non-spherical moon of Jupiter. It was found by Seth Barnes Nicholson at Mount Wilson Observatory in 1951 and is named after the mythological Ananke, the mother of Adrastea by Jupiter. The adjectival form of the name is Anankean.

Ananke did not get its present name until 1975; before then, it was simply known as Jupiter XII. It was sometimes called "Adrastea" between 1955 and 1975. Note that Adrastea is now the name of another moon of Jupiter. 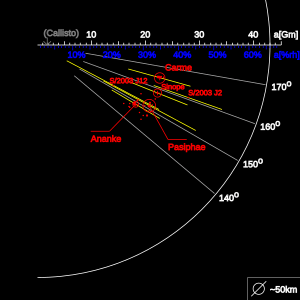 Ananke orbits Jupiter on a high eccentricity and high inclination retrograde orbit. Eight non-spherical moons found since 2000 follow similar orbits. The orbital elements are as of January 2000. They are changing a lot due to Solar and planetary perturbations. The diagram illustrates Ananke's orbit in relation to other retrograde non-spherical moons of Jupiter. The eccentricity of selected orbits is represented by the yellow segments (extending from the pericentre to the apocentre). The farthest spherical moon Callisto is located for reference.

Given these orbital elements and the physical characteristics known so far, Ananke is thought to be the biggest remnant of an original break-up forming the Ananke group.

In the visible spectrum, Ananke appears grey to light-red.

The infrared spectrum is similar to P-type asteroids but with a possible indication of water.

All content from Kiddle encyclopedia articles (including the article images and facts) can be freely used under Attribution-ShareAlike license, unless stated otherwise. Cite this article:
Ananke (moon) Facts for Kids. Kiddle Encyclopedia.