Adrastea or Jupiter XV, is the second closest moon to Jupiter. It was found by David C. Jewitt and G. Edward Danielson in Voyager 2 probe photographs taken in 1979 and received the designation S/1979 J 1. In 1983, it was named after the mythological Adrastea, who was a daughter of Jupiter and Ananke.

Adrastea was the first moon to be found from images taken by an interplanetary spacecraft, rather than through telescopic photography.

Adrastea is non-spherical and measures 20x16x14 km³ across. What Adrastea is made of and the mass of Adrastea are not known, but assuming that its mean density is like that of Amalthea (~0.86 g/cm³) its mass can be estimated at ~2×1015 kg. Amalthea's density implies that moon is composed of water ice with a porosity of 10-15%, and Adrastea may be similar.

No surface details of Adrastea are known, due to the low resolution of available images. 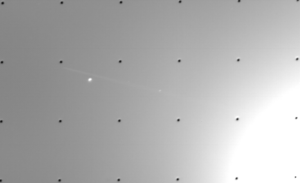 Discovery image of Adrastea, taken on July 8, 1979 by Voyager 2. Adrastea is the dot in the very middle, straddling the line of the Jovian rings.

Adrastea is the smallest and second closest member of the closer moons to Jupiter. It orbits Jupiter at ~129,000 km (1.806 Jupiter radii) within the planet's Main Ring. The orbital eccentricity of ~0.0015 and inclination of ~ 0.03° relative to the equator of Jupiter are very small.

Adrastea was found in Voyager 1 and 2 images, but appeared only as a dot. The Galileo spacecraft was able to see its shape, but the images remain poor.

All content from Kiddle encyclopedia articles (including the article images and facts) can be freely used under Attribution-ShareAlike license, unless stated otherwise. Cite this article:
Adrastea (moon) Facts for Kids. Kiddle Encyclopedia.