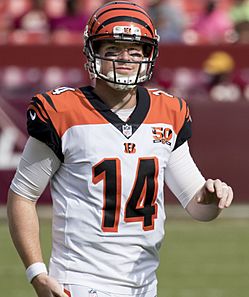 Andrew Gregory Dalton (born October 29, 1987) is an American football quarterback for the Cincinnati Bengals of the National Football League (NFL). He played college football at Texas Christian University (TCU). In his final college game, the 2011 Rose Bowl against the Wisconsin Badgers, Dalton led the Horned Frogs to a 21–19 victory. He left the TCU program as its all-time leader in wins. He also holds several statistical passing records.

Dalton was selected by the Bengals in the second round (35th overall) of the 2011 NFL Draft. He signed a four-year, $5.2 million contract. Under a West Coast-style offensive scheme, Dalton and receiver A.J. Green, the Bengals' 2011 first-round selection from the University of Georgia, have become a great quarterback/receiver combination. Dalton and Green broke NFL records for completions (completed passes) and yards for a rookie quarterback/receiver combination.

Due to his red hair, Dalton has been nicknamed "The Red Rifle" by Bengals fans.

All content from Kiddle encyclopedia articles (including the article images and facts) can be freely used under Attribution-ShareAlike license, unless stated otherwise. Cite this article:
Andy Dalton Facts for Kids. Kiddle Encyclopedia.