Angel of the Winds Arena facts for kids

The Angel of the Winds Arena (originally known as the Everett Events Center) is a multi-purpose complex in Everett, Washington, United States, designed and developed by the Everett Public Facilities District. It opened in October 2003, with the naming rights being sold to Comcast in 2007 and subsequently to the Angel of the Winds Casino Resort in 2017. The 10,000-seat venue has hosted a variety of concerts and other performances, including the Ringling Brothers Circus, Disney on Ice, the Harlem Globetrotters, and Sesame Street Live.

The venue also hosted 2008 Skate America, a three-day ice-skating championship featuring world-class skaters. The events were both nationally and internationally televised on NBC. It was the first event of six in the 2008-2009 ISU Grand Prix of Figure Skating, a senior-level international invitational competition. This was Skate America's largest attendance ever recorded in its history.

In 2016, the arena served as the host for the 2016 Pacific Rim Gymnastics Championships. It also hosted WWE's flagship TV show Monday Night Raw on February 17, 2020.

The Seattle Storm of the Women's National Basketball Association announced that it would play five home games during its 2019 season in Everett, while the rest are played at their temporary home in Seattle, the Hec Edmundson Pavilion on the University of Washington campus. The Storm played their season opener in Everett on May 25, 2019, using the same floor that had previously been installed at KeyArena.

In 2017, the arena, then known as Xfinity Arena, was host to the USA Men's and Women's Curling National Championships. The men's championship was won by 2018 Winter Olympics gold medalists Team John Shuster, while Team Jamie Sinclair captured the women's crown. 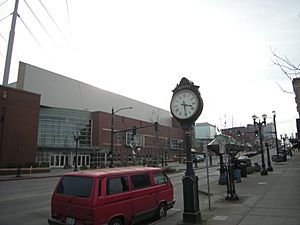 Side view of Angel of the Winds Arena

The arena was also home to the International Basketball League's Everett Explosion for one season in 2007 before they moved to Monroe and were renamed the Snohomish County Explosion, where they played until 2010. Comcast Arena also hosted arena football for three years (2005–07). The Everett Hawks were a primary football tenant in the arena for the NIFL in their first season at Everett, going undefeated at 14–0, but lost in the playoff semifinal to the Tri-Cities Fever. The team switched to af2 in 2006 and became a minor-league team where they didn't find much success, which led to their folding in 2007.

In 2012, Comcast Arena was the home of the now-defunct Everett Raptors of the Indoor Football League.

The Edward D. Hansen Conference Center is a three-story addition to the arena that cost US$12 million to construct. The facility includes a 11,385-square-foot (1,057.7 m2) ballroom that is capable of accommodating 800 guests. In addition to the ballroom, the conference center has three executive meeting rooms available as private meeting space. The conference center hosts approximately 200 events annually. It is also home to a public art collection, which includes artwork from the Pilchuck Glass Collection.

The Xfinity Community Ice Rink is an NHL regulation 200' x 85' ice rink that is located inside Angel of the Winds Arena. It is a public ice skating rink, which is used for public skating, local hockey leagues, figure skating, instructional sessions, and much more. Currently the rink is open year-round, and has the versatility to transform into a 57,000-square-foot (5,300 m2) space with the capability to host trade shows, expositions, consumer shows and special events.

All content from Kiddle encyclopedia articles (including the article images and facts) can be freely used under Attribution-ShareAlike license, unless stated otherwise. Cite this article:
Angel of the Winds Arena Facts for Kids. Kiddle Encyclopedia.