The Angora Lakes are two small freshwater lakes in the Sierra Nevada and Lake Tahoe Watershed ~1,200 ft (370 m) in elevation above Fallen Leaf Lake and Lake Tahoe. It is the location of the Angora Lakes Resort, a small summer outdoor recreation location. The lakes were named for a herd of Angora goats that used to graze in the area.

To reach Angora Lakes from Hwy 89, take the Fallen Leaf Lake Rd. turnoff for approximately 2 miles (3.2 km). (Alternate route: Lake Tahoe Blvd. to Tahoe Mountain Rd.) Turn left and climb to the top of the one-lane road and look for the dirt road and a sign reading "1214". From there an at times steep and at times paved road leads to fantastic vistas and ends in the Angora Lakes trailhead parking lot. There is a 1-mile (1.6 km) uphill hike to Angora Lake.

The road to the lower parking lot is open from approximately May 1 to October 1, during which time the resort may be accessed on foot. At the resort at the upper lake, a small snack bar serves sandwiches, "world famous" lemonade, and ice cream. Rowboats, kayaks and paddle boards can be rented.

A cliff face at the upper lake can serve as a jumping platform. The highest ledge that is typically used is approximately sixty feet above the water. During the summer tourist season, jumps are frequent.

A narrow beach consisting of granite sand, located on the northwestern shore, is a popular spot for swimming and sunbathing.

During the summer, the lake is popular for water sports, cliff jumping, and beach activities. The two cities most identified with the Lake Tahoe tourist area are South Lake Tahoe, California and the smaller Stateline, Nevada; smaller centers on the northern shoreline include Tahoe City and Kings Beach. 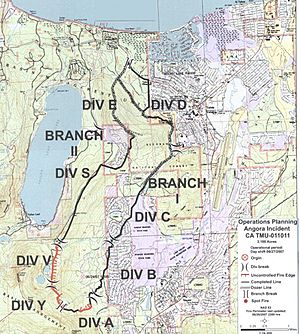 The so-called "Angora Fire" started around 1:00 pm on Sunday, June 24, 2007 at the southern end of remote heavily forested land below Angora Ridge Road and extending from Meyers and Fallen Leaf Lake on the south and west, to Camp Richardson near Lake Tahoe's southern shore. Strong winds caused the fire to quickly spread uncontrolled through steep terrain. Most of the devastation to homes was near N. Upper Truckee Rd. where the fire destroyed 254 homes, damaged 26 homes, numerous other structures valued at $141 million and prompted 3,000 evacuations, making it among the half dozen or so most destructive fires in U.S. history. No commercial structures were involved. At a cost of $15 million, 2,100 firefighters, 145 engines and 9 air tankers battled the blaze which consumed 3,100 acres (12.5 square kilometers) and filled the entire Tahoe basin with dense smoke for several days. High winds initially spread the fire and caused most of the property losses, but much calmer conditions on the ensuing three days allowed firefighters to contain it 70% with firebreak lines around it.

No thunderstorms were in the area at the time and it is assumed that the fire was human-caused.

The ash from the fire that falls in Lake Tahoe is considered to be a problem for the clarity of Lake Tahoe and Governor Schwarzenegger of California pledged to spend the necessary funds to restore the land values adequately to prevent erosion from depositing the ash on the ground into the lake and further damaging it.

Nearby peaks and mountains

All content from Kiddle encyclopedia articles (including the article images and facts) can be freely used under Attribution-ShareAlike license, unless stated otherwise. Cite this article:
Angora Lakes Facts for Kids. Kiddle Encyclopedia.